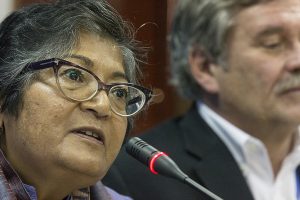 The International Truth and Justice Project – Sri Lanka (ITJP) and Journalists for Democracy in Sri Lanka (JDS) said intimidation and threats to critics have taken place before and after the presidential elections.

“With the help of activists in Sri Lanka who cannot be named for their own safety, the two groups documented 69 incidents of intimidation and threats both before and after the elections which have targetted journalists, human rights defenders, lawyers, plaintiffs, academics and opposition figures. In some cases the threats have been so serious the individuals have fled the country,” ITJP said in a statement today.

“What we are seeing is the dismantling of any attempts to address accountability and a massive shrinking of the civic space in Sri Lanka with even more sophisticated and intrusive surveillance,” ITJP Executive Director, Yasmin Sooka said.

“The international community has to ensure the increased security assistance it is giving Sri Lanka after the Easter Sunday bombings is not being misused now to crack down on human rights defenders and journalists”.

“The report also illustrates how Gotabaya Rajpaksa has spread his tentacles across the government by appointing many members of his former army regiment to positions of authority and has increasingly militarized the policing and intelligence functions.”

The Human rights groups said those involved in investigating past crimes including fraud have been removed from their posts.

“Individuals previously accused of corruption or alleged to be involved in war crimes are now in office again – the ‘deep state” is out in the open, occupying positions of authority,” said Bashana Abeywardene of JDS, adding that it’s cast a pall of silence over once outspoken journalists, trades union activists and human rights activists.

November 9, 2020 byMihi Perera No Comments
Georgia has won the Junior MasterChef Australia 2020, after presenting the judges with a three curry Sri Lankan meal.

November 4, 2020 byMihi Perera No Comments
A total of 182 police officers, including 40 elite security personnel, have been diagnosed with COVID-19 and another 2,500 have been placed under quarantine, police said.