MP Rishad Bathiudeen was arrested last morning (19) by the Criminal Investigation Department (CID) and was remanded until 27 October after being produced before the Fort Magistrate’s Court.

He was arrested at a housing complex located in Ebenezer Place, Dehiwala. 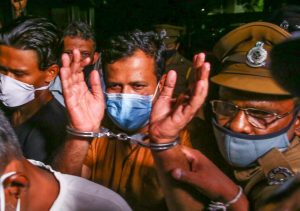 Accordingly, the suspects, arrested by the CID, were to be produced before the Colombo Fort Magistrate’s Court last evening.

He further said that during the arrest of Bathiudeen, it was revealed that there was a group of people who provide protection to persons wanted by the Police.

The DIG said that two among the seven arrestees had been arrested on 17 October in the Wellampitiya area. Upon interrogation, it had been revealed that the MP had stayed at a house in the Kohuwala/Kalubowila area for some time before moving to a house in Dehiwala on 15 October.

Among the arrestees are a lady doctor and her husband, a foreign employment agent who escorted the MP from the first house to the second, and the owner of the Dehiwala house where the MP was arrested.

The vehicle used to escort Bathiudeen has also been taken into the custody of the CID, according to the Police Media Spokesman.

Former Minister of Industry and Commerce Bathiudeen, internally displaced persons (IDP) resettling Project Director Mohamed Yaseen Samsudeen, and Project Accountant Alagarathnam Manoranjan were accused of violating Article 82(1) of the Presidential Elections Act No. 15 of 1981 by misappropriating public funds amounting to Rs. 9.5 million. They have allegedly misused 222 buses belonging to the state-owned Sri Lanka Transport Board (SLTB) to transport IDPs from Puttalam to the Silavathurai Polling Division in Mannar during the 2019 presidential election.

The CID, upon the direction of the Attorney General (AG), had sought the Colombo Fort Magistrate to issue a warrant to arrest Bathiudeen and the other two suspects on charges of criminal misappropriation of public funds and violation of election laws. However, the Magistrate ruled that the Police can proceed to arrest the suspects without a warrant, after which AG Dappula de Livera directed the Police to arrest the three suspects. Moreover, the Fort Magistrate has also imposed a travel ban on Bathiudeen on the request of the CID.

MP Bathiudeen has currently been escorted to the CID and will be produced before a court following investigations, DIG Rohana said.

Moreover, the AG has advised the CID on their failure to place Bathiudeen under surveillance 24 hours before issuing a directive for the arrest. In the meantime, the CID is carrying out further investigations.

September 7, 2020 bythemorningeditor1 liberty No Comments
The Ministry of Highways is finalising the bidding process to select contractors to construct the long-delayed Ruwanpura Expressway Project (REP), The Morning learnt.

January 5, 2021 byMihi Perera No Comments
The Committee on Public Accounts (COPA) is scheduled to convene on 19, 20 and the 21 January 2021, stated the Parliament of Sri Lanka today.