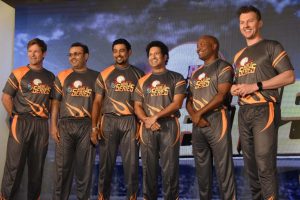 The Road Safety World Series T20 tournament, which features five international teams comprising retired greats including Sachin Tendulkar and Brian Lara, has reportedly decided to call off all of its matches in Pune, and play the remainder of its Mumbai matches behind closed doors.

Four matches of the tournament have already taken place at the D.Y. Patil Stadium in Navi Mumbai. Six league matches remain to be played – four were scheduled to be held at the MCA Stadium in Pune – followed by the final in Navi Mumbai on March 22.

The move comes in the wake of the Maharashtra government deciding to cancel all public gatherings, including political meetings and conferences, in order to check the spread of the coronavirus.

The SL Legends team is led by Tillakaratne Dilshan and features Muttiah Muralitharan and Chaminda Vaas among others.

September 12, 2019 byRevatha No Comments
Rain causes havoc as both Sri Lanka and resurgent Afghan youths are denied a chance, without fight, to play in the Asia Cup final on Saturday

Protests are a blessing for Murali movie!