Opening the morning with a solid display of tennis was the Under-15 team winning all three matches convincingly. 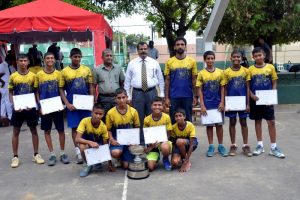 The first Singles was led by Anuth Wijesinghe (Royal = RC) defeating Nanditha Jayamanna 7/0. Abdullah Azar and Talal Sabri (RC) combined in the first Doubles to defeat Shaveen Jayasooriya and Rishane Dwight 7/2. The second Singles then sealed the victory for the age group where Ramith Herath (RC) took out Navindu Herath with a solid win by 7/0. 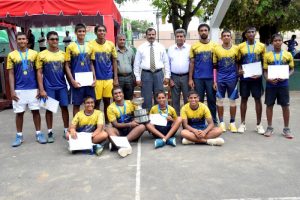 The Royal number-one Doubles team was led by Captain Nadil Silva who partnered Januda Jayasekera to pull off a thrilling win over their opponents Shivendra Perera and Rakesh Ratnasingham.

The Captain led from the front and attacked from the net while his partner was very steady at the baseline. The Royalists pulled this off 9/4 to take a commanding lead of 2-0.

Soon after this, the success continued with the No.2 Doubles team of RC, Manish De Silva and Dhilvan Herath, getting the better of Jaithra De Saram and Akira Perera 9/7, displaying some thrilling points both from the net and from the baseline keeping the spectators entertained up to the last second and sealing the victory for Royal to take the coveted trophy for this year. Meanwhile, young Thehan Wijemanne (RC) was battling it out with the Captain of S. Thomas’ (STC) and Davis Cup poolist Avindra Perera for the 4th match. However, the match was concluded with Thehan leading 6/5. Royal sealed the victory then by winning the 2nd Doubles giving an unbeatable lead of 3-0. 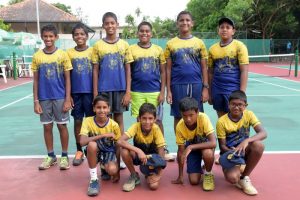 Having won the E.F.C. Pereira Trophy, the Royalist continued to dominate by winning the U–13 age group as well.

Royal once again handed over a decisive win to the Thomians. The No.1 Singles was won by Nithila Goonethileke (RC) defeating Lisal Goonethilake 7/5 and the No.1 Doubles pair of Amrik Wettimuny and Tharuk Marasinghe (RC) defeated Aaron Lawrence and Kiran Lawrence 7/2.

The young boys of Royal College kept their rivals at bay in all the matches and the U-13 victory was sealed by two more victories coming from Methvan Wijemanne of RC defeating Akash De Silva 7/6 and the other victory from the No.2 Doubles team of Thevinu Welligepolage and Thevjan Weerasekera (RC) defeating Janawa De Saram and Shawin Samaranayake 7/5.

Royal teams did not lose a single match in any of the age groups and proved that they were superior to their rivals this year.

Royal was coached by Prasanna Athauda and the Teacher-in-Charge was Jaliya Yaseratne with Riyas Aluher as the Senior Games Master.

The Captain of the Royal College team of 1962, Vasantha Wijemanne, was the chief guest at the event.

Interestingly his two nephews Thehan and Methvan Wijemanne were part of the victorious Royal outfit this year.

October 3, 2018 byRevatha No Comments
England are not worried about stringent security measures taken by the Sri Lankan authorities for their current series here, due to ongoing match-fixing investigations.

England in NZ: Bowlers fail to fire as tour match ends in draw

November 13, 2019 byTSM Web Desk No Comments
England's bowlers failed to impress as the two-day tour match against a New Zealand XI ended in a draw.