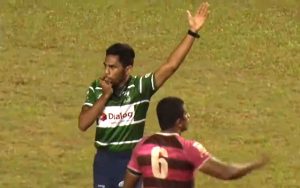 Havelocks’ President Romesh Abeywickrema in a letter dated 21 January 2020 addressing SLR President Lasitha Gunaratne has requested the latter to review the proceedings of the said match which Havies lost 22-12 at home under lights last Saturday. The result was due to, as Havelocks claim, partial refereeing.

Havelocks authorities claim that the referee of that match, Aaqil Jamaldeen, was biased towards Kandy. Havies also recall they had officially protested over Jamaldeen’s appointment two days before the match. They had instead requested the services of a foreign referee for the crucial encounter which was likely to affect the outcome of the whole tournament.

In that 21 January letter Havelock President had further added “… no less than 12 decisions went against HSC (Havelocks Sports Club) including the awarding of two tries to Kandy SC which really should have been penalties awarded to HSC based on the prevailing laws of the game (2019).”

Havelocks have also attached video evidence to 12 instances which supposedly depict “the completely biased manner in which the referee Mr. Jamaldeen conducted the game …”

Earlier, on 16 January in their protest against Jamaldeen’s appointment, Abeywickrema had written to Gunaratne, “What concerns us is the fact that there is a serious conflict of interest where Referee Jamaldeen’s brother has been representing Kandy SC and his father who is the head of the Referees Society is well known to be closely associated with the longstanding Patron of Kandy Sports Club.”

Havelocks argue in that letter that one of the reasons for the predicament the game undergoes at present is the conduct of the present referees. “… we hereby request that he (Jamaldeen) should not be appointed for any future games involving Havelock SC. Needless to say it is these officials that are responsible for killing this once popular game and the resultant poor interest and low attendance at match venues.”

“We don’t expect a replay of the Kandy match. But we need to stop this kind of injustice happening at least in the future,” Abeywickrema told media on Tuesday. Until Tuesday afternoon, there was no official response from SLR on the above queries made by Havelocks.
Tweet
Share
Pin
Share86
86 Shares