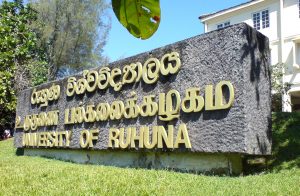 Following a conflict which had led to a brawl between two groups yesterday (09), the Ruhuna University (Matara-Wellamada premises) will be closed from 4 p.m today (10) till further notice.

The statement made by the Vice-Chancellor of the University is following a brawl between two groups after a heated argument had escalated.

Security forces had been beefed up following this incident and Police as well as Army personnel were deployed to ensure the safety and security of the University premises.

Ten students, a non-academic staff member and security officer who had sustained injuries in the incident are currently receiving medical treatment at the Matara General Hospital.

July 21, 2020 byTSM Web Desk No Comments
Private bus operators have reduced their operating numbers by half, The Morning reliably learnt.

December 5, 2018 byEaswaran No Comments
The United National Front (UNF) today urged Speaker Karu Jayasuriya to issue instructions to IGP Pujith Jayasundara to reduce the security of Parliamentarian Mahinda Rajapaksa as he is no more the....