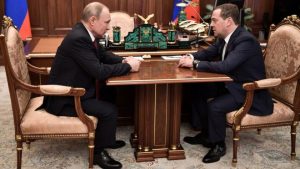 The Russian government is to resign, hours after President Vladimir Putin announced plans in parliament to change the constitution.

Mr Putin has proposed a nationwide vote on changes that would shift power from the presidency to parliament.

He has asked Prime Minister Dmitry Medvedev to take up the post of deputy head of the National Security Council.

“In this context… the government in its current form has resigned.”

The announcement came as a surprise, and in a statement Mr Putin thanked the government for what it had achieved.

President Putin’s fourth term in office is due to end in 2024, and under the existing constitution he would not be entitled to another term. BBC

April 23, 2019 byRandev No Comments
North Korean state media has confirmed that Kim-Jong-un will travel to Russia soon for his first ever meeting with President Vladimir Putin.

July 24, 2019 byRandev No Comments
Boris Johnson will begin the process of forming his government later after he succeeds Theresa May as prime minister.