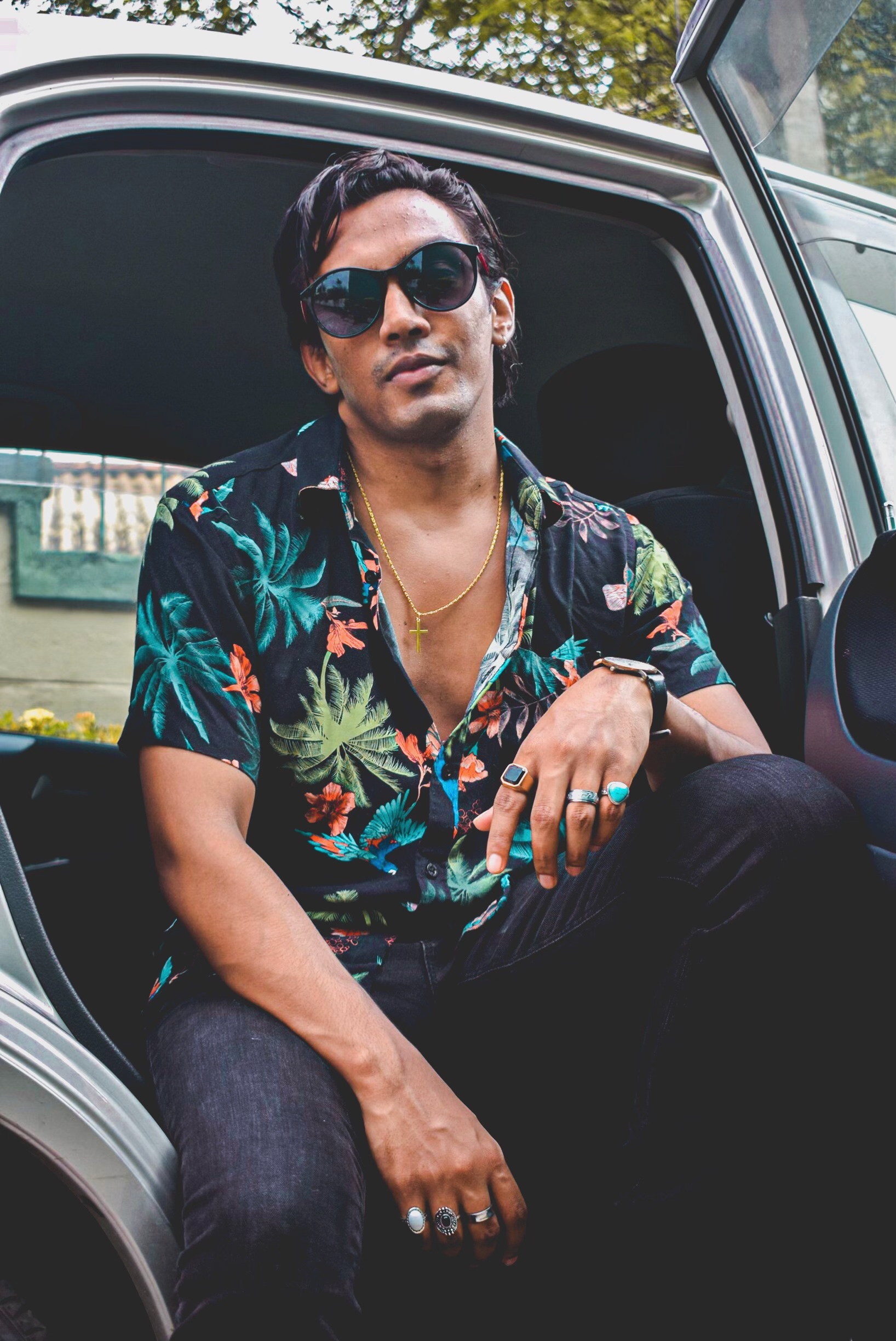 September 9, 2019 by Pavani Pavani No Comments

Ryan de Mel is a 24-year-old artist who is a member of one the most popular bands in Sri Lanka – Voice Print. Ryan is a driven individual who works hard despite many obstacles to reach new heights in the industry. He believes that when you follow your dreams and passion, and you’re good at what you do, everything else will fall into place. He is his own critic and does his best to make sure he’s satisfied with his work. He is a very humble individual who feels blessed to be talented and lucky enough to perform in front of crowds and create a fan base.

Where did it all start?

I was exposed to music since I was very young. My parents were also very much into it. My household was always filled with music. My professional career began when I was nine years old, when my mom enrolled me in a professional choir under MaryAnne David. Ever since I was nine, I was professionally trained by auntie MaryAnne. We took part in concerts, shows, and we even had a wedding choir at the time.

Who are you inspired by?

Personally, I don’t like to generalise people. I’m mostly attracted and inspired by different characteristics in people. I like to take the positives from everything I see and every person I come across. It’s the same concept that applies to me in terms of my music; I listen to a vast range of genres of music from the 70s up to date. Whenever I listen to music of different eras, there’s always something that inspires me.

For example, if you take music from the 80s, it has so many meaningful lyrics and there’s variety. Then, take the 90s where it’s all about the boy bands, R&B, and soul. All of that is sort of my inspiration. I will always have a special place for R&B.

Speaking of artists I like, Chris Brown has always been one I’ve looked up to. He’s got it all from singing and dancing to acting. As an artist of our generation, he inspired a lot of us with his creativity. I also listen to jazz. I have a slightly modern taste in jazz artists; I like Michael Buble. I also listen to Frank Sinatra and Andrea Bocelli. I was exposed to a lot of classical music when I was training under auntie MaryAnne. She definitely inspired me a lot; her strength and personality have been a big influence on me. Also, the support and love I received from my family and friends have definitely become huge inspirations for me.

Tell us about your creative process.

From the time I was small, I drew a little bit, but not on a large scale. I got into writing very recently. I hadn’t gone into that part before, and I’m not sure why. I started writing two years ago; putting my thoughts on paper.

There’s a way to make music with certain words, and you pick up on that the more you write. What I write now is not similar to what I used to write two years ago. There’s an obvious improvement. I

haven’t released any original content yet because I’m still putting it all through the process of making it something I can use, and I don’t want to put anything and everything out at once. I want to make sure that anyone who listens to the song can relate to it on many levels. In my opinion, there’s no particular time to be creative. It can come to you spontaneously, at any time of the day or night.

To be honest, it’s still very overwhelming for me. It’s been five-and- a-half years and it still overwhelms me.I was a fan of Voice Print when I was in school and I’m still a fan, and to be part of a band that I’m a fan of is very surreal.

I was still schooling when I joined Voice Print and I still remember, I was on my way home from school when I got a call from a very close friend – Julius Mitchell – who is probably the best beat boxer Sri Lanka has. He told me that Voice Print is on the lookout for young talent, and he fixed me up with an audition.

I was so excited at the time. I was about to turn 19, and I jumped at the opportunity. From March 2014, I’ve been with the boys. There were two of us who got in from the audition – Nico and myself. The rest made it a point to make us feel right at home and not once did I feel like I was new. It was all familiar ground.

After every performance, we talk about the mistakes and the high points of that performance and make sure to better ourselves and work towards becoming one of the best bands in the country.

How do you interact with and respond to your fans?

It’s the same as being part of Voice Print – very surreal and overwhelming, especially when someone comes up to me and says they appreciate our music. I’m a fan of a fan because the way I see it, I’m a normal human being and I do the most mundane things possible; I’m at a loss for words when I meet a fan – as much as they are when they meet me. I find these experiences extremely humbling. I always try to make time to converse with them if time permits.

What are your most and least favourite parts about this line of work?

My most favourite part is that I get to do what I love. I’m blessed to have the talent to follow my passion; some people are disheartened that they don’t have the necessary skills to do what they love. I get to be on stage and perform in front of so many people. The worst part about this job is that there’s no clock. For example, if we have an event until 4 a.m., we can have another event at 7 a.m. At those times, it’s not always easy to give my best, but I try.

At the moment, I have a cast on my leg and I still have to perform. But there’s no room for complaints because as the famous saying goes, “the show must go on”.

My very first performance was at my school. There was an event where a lot of external artists were invited to perform and since it was a school event, it was decided to let one act of our own take the stage with the rest of the artists. I got the opportunity to do so and I was 17 at the time.

I was extremely excited and I got through three songs, which were my favourite at the time, and my fellow school mates in the audience backed me up. That was my first time performing as Ryan de Mel the singer, not Ryan de Mel the student. Of course, the 24-year-old me still looks back and critics the 17-year- old me, but at the time, I was having a ball on stage and it was a very memorable experience.

Tell us about your most favourite performance to date.

My most favourite performance would also be my best performance. In January this year, there was a Voice Print concert called “Replay”, and we sang tracks of the most popular boy bands ranging from The Beatles to One Direction. For me, that was my most favourite show because the crowd’s reaction and feedback was immense. They were enjoying it and singing along – at some points, even louder than us. We didn’t think we would get to witness what we’ve seen at international shows. The feeling was indescribable.

What does music mean to you?

People would think that as I’m a creative person, a performer, I would be open with my feelings, but it’s actually the opposite. I express myself through music. It’s easier for me to be open on paper than to be open in person. Music has helped me get through my worst, and even when I was happy and at my best, music has been there.

What advice would you give to someone who wants to follow in your footsteps?

I strongly believe that everyone should follow their dreams, their passion, and what they’re good at. That is very important to remember. Recently, I watched one of Steve Harvey’s videos, and as much as he is a comedian, he also puts out motivational content. I recently watched one of his videos where he mentioned that what you love and what you’re good at are two different things. You need to know what you’re good at and what comes easily to you. When you do what you do best, you will never be stressed.

So I would tell you to follow your dreams and passion, but I would also say to pay more attention to what you’re good at because that comes to you naturally.

December 15, 2018 bythemorninglk No Comments
United National Front (UNF) MP Patali Champika Ranawaka asserted that while the executive presidency should remain, its powers should be pruned and a proper balance struck between the executive,...