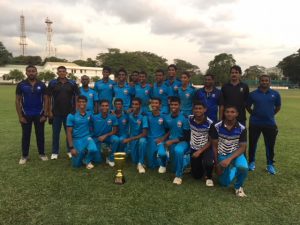 The victorious S. Thomas’ U-17 Div. II cricket team posing with the Singer Trophy on Thursday at the Thurstan Grounds, Colombo

S. Thomas’ won the toss and elected to bat. They made 152 all out in 49.3 overs. Skipper Vineth  Bandaranayake scored 33 and Ranuka Perera made 28. Kavinda Ishwara, Dulaksha Peiris and Dineth Deemantha took two wickets each for Siri Piyarathana.

March 12, 2020 byRevatha No Comments
England’s cricket team will refrain from taking selfies with fans on their tour of Sri Lanka due to the coronavirus