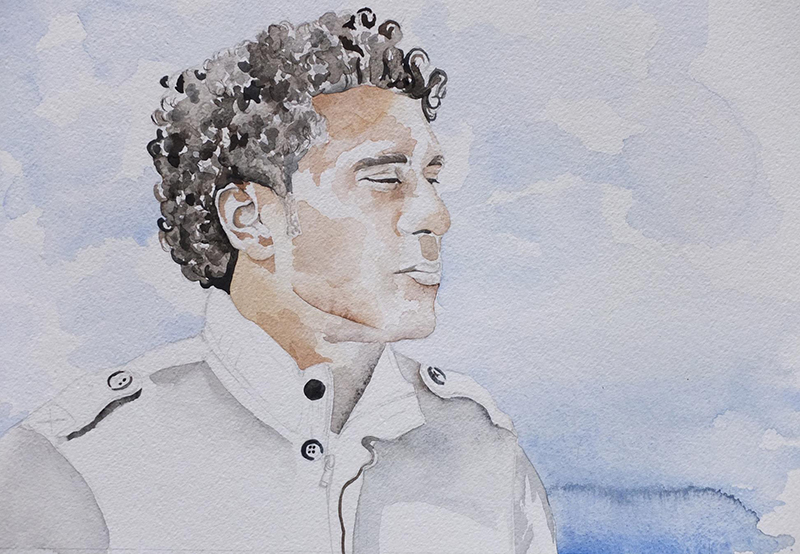 August 16, 2020 by Jennifer Anandanayagam No Comments

Making a film is like picking a fight with a bully: Sai Selvarajan

2020 has been the kind of year we probably only ever alluded to being a very distant possibility in our adrenaline-fuelled imaginations after watching movies like World War Z or Contagion. Yet, it is upon us. While many of us spend our time reflecting on what really matters, I stumbled on Coup d’état Math, a short film by Sai Selvarajan.

I couldn’t look away.

Not being able to open a new tab on Chrome and direct my attention to something else was golden, to say the least. This film is precious. Poignant.

“It’s my most personal,” Selvarajan wrote back when I eventually tracked him down via email to Arlington, Texas. The film depicts four immigrant stories — a fight to be born, a fight to survive, a fight to find your place, and the fight to maintain. It opens with Selvarajan’s own birth story on a Wednesday night amidst the backdrop of riots and curfew in Sri Lanka. The other two are a product of discussions he’s had with his cousins who had experienced refugee camps and door-to-door looting. The last vignette is set in America and Selvarajan shared in another interview that this was because he wanted to show that the immigrants’ journey is infinite. 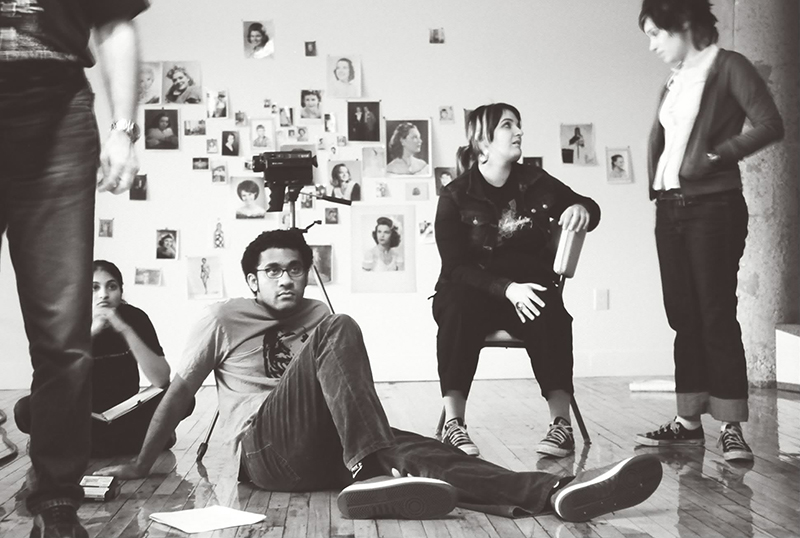 Risking two lives to save one, that’s Coup d’état Math

The film demands your attention but it doesn’t direct the emotions that arise as you take in all 8 odd minutes of it. It’s almost as if the narrators — carefully scouted and chosen by Selvarajan — and visuals — watercolour paintings by his wife Amanda Selvarajan and illustrations, and woodcuts by his longtime friend Olivia Saldivar, hold space for you as you watch. Allowing you to feel and accept the truth in the four stories in your own unique way.

Where did it all start? Selvarajan ponders the question himself in a piece he’s written for advertising magazine SHOOTonline: “Was it the Muslim ban? Was it that Nina Simone documentary? Was it my cousin talking about his time in a refugee camp? Was it seeing a sign for 10 PM pickup at a daycare? Or was it my mom and dad breaking curfew during a coup d’etat so I could be born?”

He’s not sure but “all that sh*t” went into his film. He likened making a film to picking a fight with a bully. “You know you’re gonna get your a** kicked, but it’s the right thing to do.”

This year’s SXSW in-person event was cancelled due to the Covid-19 pandemic, but not before Selvarajan’s animated short film earned its well-deserved recognition. The cancellation, however, hurt him. “It really hurt. In a way I can’t explain,” wrote Selvarajan for SHOOTonline. He wanted to watch his film with 250 strangers and wanted to feel the air in the room.

He continued: “When it happened I sent this text to everyone I know: ‘I’d rather die at SXSW than not screen my film.’ Yes, dramatic. But that’s how I felt. And I bet there are other filmmakers and musicians that had that same feeling. We’d have risked it, had we been asked. But there’s perspective, too. I might die a heartbroken man, but I know that it was a privilege for only the privileged can ever hurt like this.”

The festival described its decision to award the honour in this way: “‘The social realism captured in the film’s animation adds an element of vulnerability and rawness to the storyline. Sai’s intentional and thoughtful approach is illustrated in every detail of the film. It presents a rich visual tapestry of mixed media combining animation and live-action with gripping stories of pathos and human resilience.” 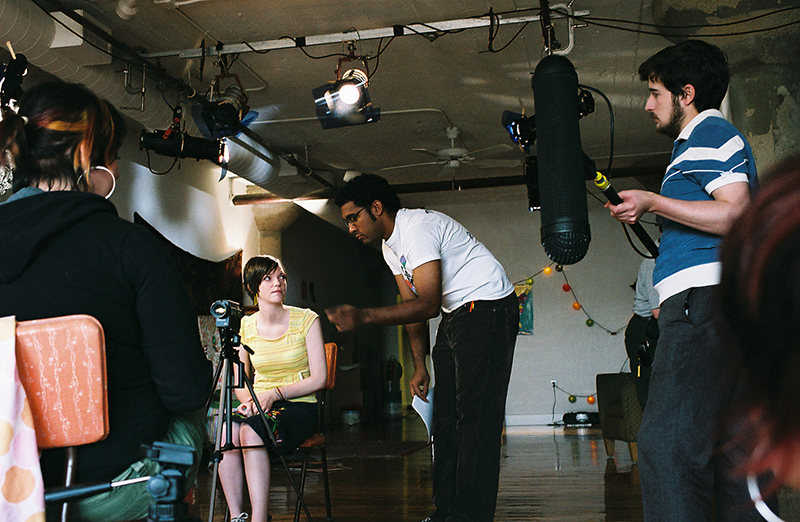 Selvarajan was born in Colombo and raised in Nigeria. The family left Nigeria when he was just 10 years old because the government was becoming unstable. They went to the UK, but the country had a work visa quota and it was already filled, so they headed to the US. “I had an aunt and uncle in Dallas, so we came here and it all worked out,” he shared.

The experience of leaving the country he was born in and forging a life in a new country is something his own family has gone through three times. Selvarajan hopes that through Coup d’état Math, people feel empathy and compassion for people leaving their homes behind for new ones. “That’s the heart of the film.”

He has wonderful memories of Sri Lanka, visiting every summer when he lived in Nigeria, going to the beach and getting ice cream at Elephant House, but wishes, now, that everyone in the country could coexist peacefully. “I was planning on visiting in December of 2019 with my wife and two daughters, but after the Easter (Sunday) attacks, we had to cancel that trip.”

Selvarajan’s favourite things about the country are its food and people. “The food is incredible even if you don’t eat meat or fish.”

He said that there’s something about a Sri Lankan’s eyes and hair, “I can always tell a Sri Lankan when I see them on the streets.”

Tilaka Singham, Selvarajan’s aunt,was a national table tennis champion in Sri Lanka back in her day. Her sister (Selvarajan’s mom) managed Singham’s fan club. “If anyone at your paper has any pictures or articles of her, I would love to see and read them,” he shared, telling me that all his aunt’s trophies, pictures, and articles were burned up during the riots.

Selvarajan took an introduction to video class in College and was instantly hooked on filmmaking. Currently working as senior editor at Lucky Post, a full-service post-production studio in Dallas and Austin, he edits brand films and commercials, and sometimes directs or creatively directs projects through the studio as well. “The thing I enjoy most about it is the people. We’re a smallish firm and everyone works well together. It’s a real team effort.”

Along his career, he has also worked with Hothaus Creative as lead editor and as senior editor for Brushfire Films. “They taught me a lot. I really cut my teeth there.”

The pandemic in Texas has gotten worse over time, although it wasn’t bad in the first few months. “Our Governor and Lieutenant Governor aren’t very good leaders and they chose to open back up against the wishes of medical experts and now the whole state is paying the price,” he commented. Working remotely from home, he’s “hanging in there. We have good days, not so good days.”

The filmmaking industry, much like all other industries, has taken a hit; there are no productions and all theatres have been shut down. Being an artist is hard in itself and the pandemic has provided just another impediment to be overcome. But Selvarajan thinks that the really talented folk have their heads down and are working. “Whether it’s writing or getting better at their craft, they’re all working and once this is all over, they’ll be the ones to come out guns blazing.”

I asked Selvarajan if he would consider making a film about the pandemic and he said he’s not sure if he has a unique angle yet. “I’ve been thinking about this very thing and how in 40 years, there’ll still be books and movies coming out about this. I always want my films to have a unique voice and feel. I don’t know if I’m there yet with a Covid-19 story.”

The pandemic in itself has taught him an inescapable truth most of us are beginning to see and accept — life isn’t about things, it’s about connecting with people.

Once you stumble onto Selvarajan’s work on Vimeo, it’s hard to stop moving from one video to the next, and two creations that really caught my attention were Sugarless Tea and Maggie’s House.

With Sugarless Tea, I was taken on a journey to India and Queens, New York, following the tale of two brothers who’d been separated. It is a story of brotherly love and sacrifice. Again, the use of watercolour paintings by his wife adds a sense of innocence to a story that is packed with complex emotions.

“It (Sugarless Tea) spanned decades and continents, and I didn’t have the budget to shoot it so I went the route of paintings. My wife is a watercolour artist so it was a way for us to work on a project together,” he shared.

Dealing with the sensitive and all-important topic of alcoholism, the film ‘Maggie’s House’ was something that came about via Lucky Post. Featuring The Magdalen House, located in Dallas, the visuals welcome the viewer to witness intimate narrations by women who speak of the role The Magdalen House has played in their lives with its spiritual solution to alcoholism.

“We went to the house and it was a real special place. I’m so proud of all those women and how the film turned out. It was an amazing experience,” said Selvarajan.

Running, playing basketball and collecting vinyl records are pursuits he enjoys and he is currently making a documentary about his own mother and her love for basketball.

What’s a typical day like for Selvarajan? He wakes up at 6 AM, writes till 7:30 and goes for a three mile run. Then he comes back home and spends time with his two daughters, aged 8 and 4. From 9 – 5, he works on editing, then eats dinner and spends more time with the kids. “Once the kids are asleep, I spend time with my wife.”

The challenge in his industry is to keep going and he said that one doesn’t win by winning, but by sticking it out and going on. “The biggest challenge is finding people to green light a project. You gotta just keep knocking on every door.”

As for being an immigrant himself, and leaving what constituted home the number of times he has to build a life for himself on other shores, Selvarajan shared that he does carry those emotions with him, even to this day. “At the time, it was very emotional and almost traumatic, but it made me who I am. At the time, I didn’t want to leave, but now I know it was for the best and I wouldn’t change a thing.”

He has a love for Sri Lanka, Nigeria, and America. Living in all three places has given him an understanding of other cultures and ways of life that he still holds on to today.

His message to anyone going through something similar is to never give up on their dreams. “We’re all immigrants in a way. Keep pushing and find your safe space and call it a home.”

He admitted that there’s a little survivor’s guilt in him as he didn’t personally experience the riots, but his heart goes out to any and all immigrants, those who are living under dire conditions and those who are just looking for a better life.

As for his first home, he sends love for the present time. “I hope you all hang in there. We’re all in this together. I might be on the other side of the world, but I carry Sri Lanka with me everywhere I go.”

Three words to describe yourself?
Storyteller, Father, Husband. I spend most of my time doing those things.

Favourite movie of all time?
Do the Right Thing. It still rings true to this day.

Favourite short film of all time?
Pioneer by David Lowery. It’s a 20 minute film that goes by like 5 minutes. It’s just two people in a room talking. It’s masterful.

November 1, 2020 byCharindra No Comments
There’s something about a conference that fosters growth.