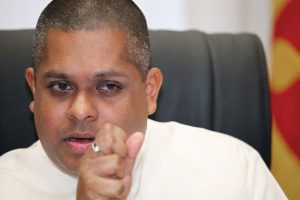 Former UPFA MP Sajin de Vass Gunawardena has been granted bail by the Colombo High Court after being indicted by the Attorney General over money laundering charges.

After the indictment papers were served the Colombo high court then ordered that the defendant be released on a cash bail of Rs 500,000 and two personal bails of Rs 5 million each. The judge called for a report after obtaining the defendant’s fingerprints.

The court also issued a travel ban  and ordered Sajin de Vass to hand over his passport to the court. However, The HC Judge stated that if the defendant wished to travel abroad he could do so after obtaining the court’s permission.

The hearing of the case was postponed until October 01.

EU to monitor implementation of recommendations

December 1, 2019 bythemorninglk No Comments
The European Union (EU) will monitor the implementation of the final recommendations to be submitted to Sri Lanka following the recent presidential election after most of the past recommendations were