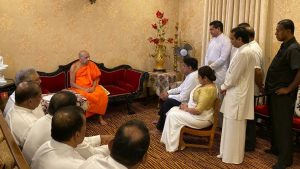 Premadasa is to launch his election manifesto to the public in Kandy today.

The chief prelates raised concerns over the signing of agreements that were disadvantageous to the country. Responding to their concerns, Premadasa said that he would not sign any agreement which would harm the sovereignty of the country.

He further noted that the public will be given an opportunity to voice their opinions on such agreements with foreign entities.

Meanwhile, Tamil parties have agreed to arrive at a decision regarding their support following the launch of Premadasa’s manifesto.

September 8, 2020 bythemorningeditor1 liberty No Comments
The Geological Survey and Mines Bureau (GSMB) stated that it would need time till tomorrow (9) to publish the full report on the seismic activity that was recorded in the vicinity of the Victoria Rese

October 10, 2019 byTSM Web Desk No Comments
A Vote on Account on state expenditure for the first four months of 2020 will be presented to the parliament  on 23 Oct.