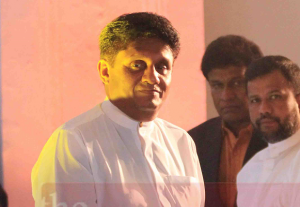 Sajith Premadasa today(18) said that crucial decisions regarding the party leadership should be taken this month itself.

Premadasa expressed these views at a meeting held in Attanagalla.

Yesterday(17), Premadasa noted that he would not take up premiership candidacy if he were not made party leader.

“It is no secret that the presidential candidacy was given to me at the eleventh hour. Due to this we had a limited time to take our campaign forward,”Premadasa said.

Premadasa added that he would not attend anymore meetings as it was a ‘ploy by some members to buy time’.

He further noted that certain members had organised mudslinging campaign against him.

“People are not fools to believe these mudslinging campaigns. If the same effort was given to me during the Presidential election campaign, my victory would have been certain,” Premadasa noted.

September 19, 2019 byTSM Web Desk No Comments
Tamil National Alliance M. A. Sumanthiran said the TNA was disappointed with members of the yahapalana government who opposed the abolition of the Executive Presidency.