Sajith vows to clean up politics, assures he will appoint ‘first time’ PM 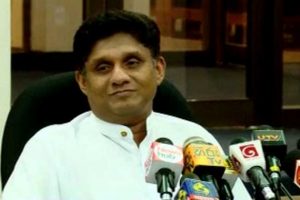 “Sri Lanka needs a clean up and my mission is to get the job done. Every aspect of the political culture has to be transformed for Sri Lanka to move forward,” Premadasa said.

Meanwhile, the presidential front runner assured that a ‘new first time’ Prime Minister will be appointed with a majority in parliament.

“No person who is accused for aiding corruption or directly involved in corruption will be given ministerial positions.”

He said old politics, corruption, nepotism, greed, politics of privilege and cronyism will be wiped out while leaders will be held responsible for their actions.

In his ‘zero tolerance approach’ to rooting out ‘social injustice and greed’, he assured that no minister will be allowed to hold positions where there is a conflict of interest.

Premadasa added that no minister will be allowed to appoint family members to positions of power.

“National list ministerial positions will be filled by qualified professionals.”

According to him, “All government ministers will be required to publish online asset declarations. A central data base of assets and liabilities under the Barbary commission will be setup.”

“Corrupt politicians will be dealt the same way drug dealers and abusers of women are dealt with, swiftly and sternly, within the law and with new laws,” Premadasa stressed.

Premadasa added that no qualitative or macro change in the constitution will be made without broad national and social deliberation and a referendum.

Speaking further he said duty free vehicle permits will be withdrawn and Sri Lanka’s VIP culture will be brought to an end.

December 29, 2018 byMalik No Comments
All the function, responsibilities, and institutions which come under the purview of each Cabinet ministry have been gazetted through a Gazette Extraordinary issued by President Maithirpala Sirisena.

US to test air logistics hub concept in Sri Lanka

August 24, 2018 byEaswaran No Comments
The US is to test an air logistics hub concept which utilises Sri Lanka’s strategic location in the Indian Ocean to ensure the quick availability of relief supplies, equipment and other material when