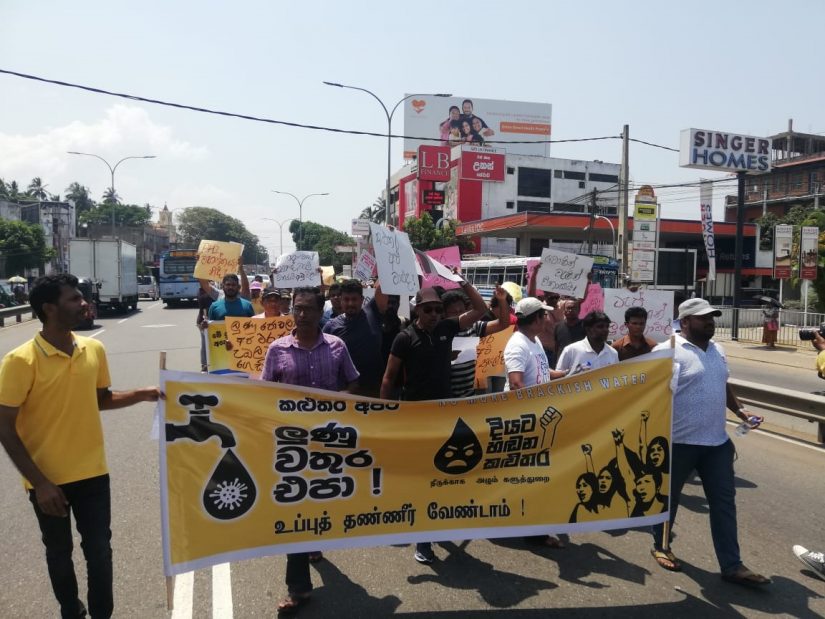 With the dry spell commencing from Kegalle District’s Ruwanwella Divisional Secretariat (DS) on 17 January, as of yesterday (29), a total of 11 DS divisions across five districts reported drought conditions. The prevailing dry spell has affected 4,762 families and 6,983 persons in four districts, the Disaster Management Centre (DMC) informed The Sunday Morning.

People from the area took to the streets in protest last Wednesday (26), demanding a permanent solution for the issue which happens to take place periodically. According to the DMC, about 212,728 persons from 50,452 families in the DS divisions of Kalutara, Beruwala, Panadura, and Dodangoda are therefore faced with a drinking water shortage.

The Sunday Morning contacted DMC Assistant Director – Media Janaka Handunpathiraja to inquire about the water shortage issue and measures the DMC has taken to address the situation in drought-affected areas.

Handunpathiraja further revealed that the saltwater intrusion had affected the divisional secretariats of Kalutara, Panadura, Beruwala, and Dodangoda, to which daily water supply is provided through water bowsers.

With the paddy harvesting season recently ending, Handunpathiraja stated that the prevailing drought would not impact the rice farmers. However, the drought had affected tea plantations in Bulathkohupitiya.

“If this dry spell continues for the next two months, then it might have an impact on cultivations. But at present, the potential hazard caused by this dry weather is forest fires. Many farmers are now preparing the ground for their next cultivation cycle and the fires they start to clear the land sometimes spread to the forest, which then sets off forest fires.”

Handunpathiraja informed us that awareness has been raised among the farming communities to be cautious when they set their land areas on fire for cultivation and to take measures to prevent it from spreading to the adjacent forests.

State Minister of Water Supply Facilities Vasudeva Nanayakkara earlier this week stated that due to the current dry spell, there was a drop in the river water levels, which had caused the saltwater intrusion.

“Given the current situation, I have requested the National Water Supply and Drainage Board (NWSDB) to consider waiving the water bills of the families that live in the affected areas. In the meantime, the Government is looking at completing the Agalawatta (Integrated) Water Supply Project by mid next year, so that the water issues faced by families living in the stretch of Kalutara to Ratmalana would be solved.”

In addition to that, another water supply project is already in the works in Pattivila on the southern bank of the Kelani River, which is scheduled to be launched in April this year, Nanayakkara stated.

He noted that people tend to use more water during the dry season and farmers tend to increase the watering frequency for their crops such as fruits, vegetables, and flower cultivations.

“Controlling the water usage of the public becomes a difficult task for the Government. Since there is an ongoing drought in certain areas, we request the public to look at ways to store water for their daily usage and urge the public to use water sparingly. Furthermore, the Government is also looking at providing water storage tanks to low-income families that can then pay the Government back in instalments. The instalments will be worked into the monthly water bills,” Nanayakkara explained.

With saltwater intrusion occurring seasonally in the Kalutara District, and so creating a recurring drinking water shortage, we contacted NWSDB Operations and Maintenance Manager for Kalutara Eng. U.D.P.M. Gunasinghe to inquire as to what measures they had taken to address the issue.

Confirming Minister Nanayakkara’s statement, Gunasinghe informed The Sunday Morning that the Aluthgama-Matugama-Agalawatta Integrated Water Supply Project is currently in the works and once completed would address the water shortage issues faced by the residents of these areas.

Gunasinghe also noted that the NWSDB has proposed to the Department of Irrigation that they build a suitable barrier to prevent saltwater intrusion.

With little to no rain experienced in water catchment areas over the past few weeks, another main river that usually reports saltwater intrusion is the Kelani River, which supplies water to the water treatment plants that supply water to the Colombo District.

NWSDB Western Production Deputy General Manager W.N. Premasiri, speaking to The Sunday Morning, informed us that the water quality has not changed yet and that there was no saltwater intrusion reported.

“A sand barrier is set up to prevent saltwater intrusion in the Kelani River this January, and hopefully that will mitigate the issue. In the meantime, we have sufficient stocks of water at present in our treatment plants, which will fulfil the daily requirements of the consumers. Given that the island is experiencing warm weather conditions, we urge the public to use water sparingly.”

January 5, 2020 bySarah Hannan No Comments
The Ministry of health is to introduce a label to indicate sugar, fat, and salt content for solid and semi solid foods and will implement strict regulations on food outlet hygiene.