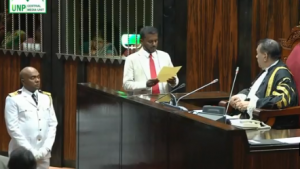 Civil society activist Saman Rathnapriya was sworn- in as a new MP through the UNP National list before Speaker Karu Jayasuriya a short while ago.

Following the announcement of Dr. Wickramaratne’s resignation one of the UNP National List MP seats was left vacant.