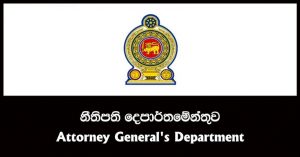 Rajaratnam will replace Solicitor General Dilrukshi Dias Wickramasinghe who was interdicted by the PSC on the 24 September over an alleged incriminating tele conversation with Avant-Garde Chairman Nissanka Senadhipathi.

In the leaked recording, the female voice purported to be Wickramasinghe’s can be heard saying “I know how to break the law and make the law.” She also expressed her regrets over filing the Avant-Garde case while blaming the country’s disorderly politics as the reason behind the case.

Budget 2019 ready to be presented to Parliament

March 4, 2019 byRandev No Comments
The Budget for 2019 is currently being finalized and is to be presented to Parliament tomorrow (05).

Govt. to proceed with Aruwakkalu: Too costly to cancel

May 17, 2020 byTSM Web Desk No Comments
Despite vehement opposition by environmentalists and residents in Puttalam, the Government has decided to go ahead with the Aruwakkalu Waste Management Project launched by the previous Government.