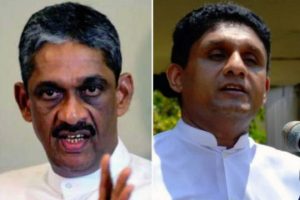 He was speaking during the maiden presidential rally at the Galle Face Green  today.

He said Fonseka was well deserving of the position as he had served as Army Commander during the end of the war in 2009.

“He is not a ‘card board hero’ but a true war hero who defeated terrorism from the country. “Premadasa  said.

Premadasa also accused the previous government over the imprisonment of Fonseka in 2010.

He added Fonseka will be tasked with the responsibility to eradicate modern terrorism. “Fonseka will also spearhead the war on drugs to safeguard the children of this nation,” Premadasa said.

Elections to be postponed?

May 14, 2020 byTSM Web Desk No Comments
The parliamentary election scheduled for 20 June is likely to be postponed further as more time is needed for preparations than usual, due to the Covid-19 situation in the country, The Morning learnt.

Flaw in gazette on MRP for coconuts: NPP