November 7, 2019 by Charindra No Comments 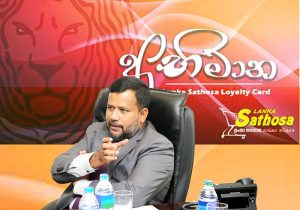 Sathosa is embarking on this major initiative to expand its customer base while meeting the competition, it said in a press release today (7).

“Our work is aimed at giving the best to the local consumer while facing competition” said Minister of Industry and Commerce Rishad Bathiudeen on 5 November in Colombo. Minister Bathiudeen, under whom Lanka Sathosa functions, was in discussion with his officials at the Ministry in Colombo 3 ahead of the launch event of the LSL ‘Abhimana’ loyalty card on 8 November in Battaramulla.

“Lanka Sathosa Limited (LSL) expanded its island-wide branch network to 423 and has become the largest supermarket chain in Sri Lanka today. LSL Loyalty Card holders will be able to use the card in any branch, with many benefits including discounts from the 423 outlets” said Minister Bathiudeen and added: “The “Abhimana” card is Sri Lanka’s first ever government owned Consumer Loyalty Card in FMCG sector and I commend Lanka Sathosa staff, its sales and marketing teams for their work on it.”

A nominal subscription fee is to be levied when the Abhimana Card is first issued to the consumer while it is to be issued free of charge to pensioners, government employees, and the military personnel.

June 17, 2019 bythemorninglk No Comments
The full implementation of the working capital soft loans for the tourism sector faces further delays with only five banks having agreed to grant loans as at Friday, 14 June.

October 26, 2019 byThe Sunday Morning No Comments
“Corporate wellness” is another one of those trending topics within the business world – the feel-good buzzwords that represent the intervention of employers in improving the overall health of their