Schools to reopen as scheduled 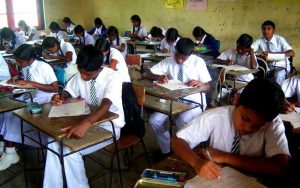 Schools in the country, especially in Colombo, will be placed under tight security, the Police said.

Police Spokesman Ruwan Gunasekera said that a special search operation will be conducted in and around Colombo schools today.

Schools will reopen tomorrow (Monday) as scheduled despite some teacher trade unions calling for another postponement owing to security fears.

Secretary to the Ministry of Education Nihal Ranasinghe told the Sunday Morning that all government schools will reopen on 6 May as scheduled.

“So far, we have had no reason to change our decision. We have adopted security measures to ensure the safety of the students. Thus, all government schools will reopen for their second term as scheduled,” the Secretary stated.

The students of government schools have been advised to purchase clear schools bags, pencil cases, and even lunch boxes prior to the school term, due to the prevailing situation in the country.

Speaking to The Sunday Morning, Chairman of the Ceylon Teachers’ Union Joseph Stalin stated that the Government must regain the confidence of the parents before commencing the second school term.

“According to a government circular that was released at the beginning of this month, the responsibility of the safety of students within school premises was given to the principals and teachers of the schools. In normal circumstances, this would not have been an issue,” Stalin stated.

Following the Education Minister stating that security will be provided for government schools, Stalin revealed that education faculties of several schools held meetings with the heads of several police stations where the security forces revealed that there were simply not enough police officers to man the doors of every school due to their mounting duties.

“The responsible authorities should communicate with each other and come to one conclusion as opposed to what is happening now, where different authorities relate different stories. This is the only way to build the confidence of the parents,” Stalin stated.

Fear over attempts to make Sajith a figurehead

February 12, 2020 byTSM Web Desk No Comments
General Secretary of the new UNP-led alliance MP Ranjith Madduma Bandara today said there were some members who were planning to make Sajith Premadasa merely a figurehead of the broad alliance.