Scrapping 19th Amendment will give rise to a dictator: Bandara 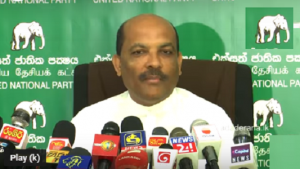 United National Party(UNP)  Parliamentarian Palitha Range Bandara said that the government’s attempt to abolish the 19th Amendment will give rise to a dictator.

UNP has also stated in several occasions that it will not support in Parliament the government’s plan to repeal the 19th Amendment.

Bandara during a press conference today(23) said the 19th Amendment was brought to reduce the powers of the Executive Presidency and prevent a dictatorship in the country.

The 19th Amendment to the constitution was passed in Parliament in April 2015 with the support of 215 MPs.

The amendment envisages the dilution of many powers of Executive Presidency, which had been in force since 1978.

20th Amendment was not submitted to Ministerial Committee: Lakshman

October 6, 2020 byCharindra No Comments
The government did not submit the 20th Amendment to the Constitution to the Ministerial Committee before submitting it to the Parliament, when it should have been discussed with Ministers of all parti

‘Lockdown not needed yet’ – President

March 17, 2020 byTSM Web Desk No Comments
President Gotabaya Rajapaksa a short while ago said  there was was currently no need for a nationwide lockdown to curb the spread of the coronavirus.