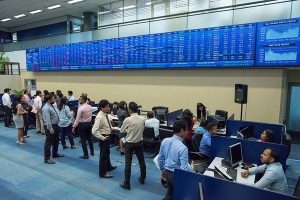 The newly appointed Chairman of the Securities and Exchange Commission of Sri Lanka (SEC) Viraj Dayaratne, PC held a meeting with the leadership of the Colombo Stock Exchange (CSE) today (19).

The CSE was represented at this meeting by Chairman Ray Abeywardena CEO Rajeeva Bandaranaike, Chief Regulatory Officer Renuke Wijayawardhane and other senior managers.

The Members of the SEC Commission, namely Mr. Manil Jayesinghe, Mr. Naresh Abeysekera and Mr. Sunil Lankathilake, attended the meeting along with the Chairman.

This was the first in a series of meetings to be held with capital market stakeholders by the SEC, which regulates the CSE, stockbrokers,Unit Trusts, margin providers and credit rating agencies.

The Sunday Morning Business exclusively reported yesterday (19) that the next meeting in this series is scheduled for 25 February with the Chief Executive Officers of stockbroker firms.

These meetings with various stakeholder groups are to be held in order to enable the SEC to discuss issues in general and obtain their views and proposals with regard to the prevalent regulatory framework and the development of the capital market of the country, the SEC said in a press release.

“It is also envisaged that such meetings will improve cooperation between the regulator and the stakeholders and provide them an opportunity to work together towards the common goal of capital market development,” the SEC noted.

June 25, 2019 byCharindra No Comments
INSEE Ecocycle Lanka, the waste management arm of INSEE Cement, has signed an agreement extending its waste management services to the Board of Investment (BOI) up to 2035.

January 14, 2019 byRandev No Comments
The 10-member committee appointed last week is the latest attempt to restructure the national carrier since 2008. What were the committees that came before it?