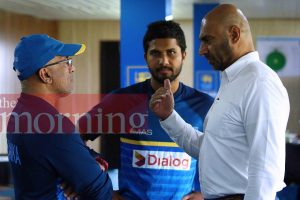 SLC has sought a clarification from the ICC over the matter.

The ICC’s Senior Manager of Umpires and Referees Adrian Griffith has sent the following, outlining ICC’s stand on the issue.

“When the position of Chairman of Selectors was offered to Graeme (Labrooy), he immediately consulted us and we saw no conflict of interest with him holding a position with SLC, such as this, and being a referee.

Our only concern, surrounded ensuring he would not be officiating any games or events, where he was involved in selecting the team.

As such, we did not appoint him to the U19 Cricket World Cup in New Zealand. He continues to be eligible however, to officiate in women’s cricket, as he is not involved in the selection process of the Women’s Team.”

June 22, 2019 byRandev No Comments
England were strangled into a shock 20-run defeat by Sri Lanka that dented their hopes of reaching the World Cup semi-finals and breathed life into the tournament.

February 26, 2019 byRevatha No Comments
Sanath Jayasuriya has been banned from all cricket for two years after admitting breaching two counts of the ICC Anti-Corruption Code