Serene Menuchah Wijesinghe Abeyesekera is one of the youngest members introduced to underwater hockey (UWH) last year. She is an above-average student at Lyceum International School and is 12 years old. She is one of the many youngsters under the age of 10 to have joined the S. Thomas’ College Sub Aqua Club (STCSAC) since it was opened to the public in 2001. Serene is currently part of the school’s swim squad and is an active member of the nature club. She took up scuba diving as her father is a professional diver and the appointed Diving Officer at STCSAC. In the beginning of this year, she began her snorkelling training, a requirement prior to taking up scuba diving as per the STCSAC training programme. And now, Serene is ready to take adult membership of Sri Lanka Sub Aqua Club (SLSAC). Below are the excerpts of the interview with The Sunday Morning Little Stars

Let’s start off by telling the readers a bit about yourself.

I’m Serene Menuchah Wijesinghe Abeyesekera. I am 12 years old. I attend Lyceum International School in Nugegoda. I have three siblings and a dog named Caesar – a mix between a street dog and a lion Pomeranian. I have a few close friends and they are Emmalee, Hasna, Dulanga, Inara, Resandi, and Sethuli. I have Dutch, Burmese (Malaysian), and British ancestry. I love collecting sea shells – it makes me feel like I have a connection with the sea. I also love to read books and my favourites are the Harry Potter series. I recently received a certificate for good marks in business studies from my school. At the moment, I am eagerly waiting to take part in the interhouse swimming championship.

What are the sports you take part in and what is your favourite among them?

I take part in swimming and gymnastics, out of which swimming is my favourite.

You are one of the youngest to have joined STCSAC since it was opened to the public in 2001. How has your experience been so far as a member of STCSAC?

Well, I was really excited when I was going to join STCSAC. I learnt a lot from STCSAC and really enjoyed myself. My father is my coach, so he explains to me at home whatever I don’t understand during the lesson. But since I’m an aquatic person like my father, I find the pool and ocean like my second home.

You recently started snorkelling training. Tell us about the experience.

Snorkelling gear includes the mask, snorkel, and fins. The objective of the training programme is to be underwater for a longer period of time without tanks. Our training started off as a bit hard, but it got easier with continuous practise.

Why do you think it is important to observe marine life without disturbing their environment?

Marine life is fascinating. If we disturb it, not only marine life, but also the life above water could get harmed. We are ruining a lot of amazing things in the sea; sometimes, we destroy them without even knowing it. For example, the Great Barrier Reef, once home to many corals and fish, is now dying due to human actions.

What is your best memory in scuba diving?

Well, I’m not sure about scuba diving because I just began it, but I do have good memories for snorkelling. Once when I was learning the “duck dive”, one akki (Rachel) who was teaching me the dive said that I looked like a dead fish when I practised it. And then I splashed her.

Tell us about underwater hockey (UWH).

Well, for UWH, you must wear your snorkelling gear. You have a sickle-shaped stick and you hit the puck with it. You cannot hit anyone who has the puck because then you’ll get a foul. There are so many rules in underwater hockey.

How has your experience in UWH been so far?

I enjoy UWH so much! I came up with a brilliant plan to score goals. I always stay above the puck, waiting till no one is pushing it, and when I do get the chance, I push it to the opponent’s goal. Ä Who support you in achieving your goals? The main people who support me are my parents, siblings, and grandparents.

Finally, what is your ambition?

I want to be an animal rescuer engaging in work like that of Embark and have a part time job as an archaeologist. I also have a dream to be an Olympic swimmer and gymnast. 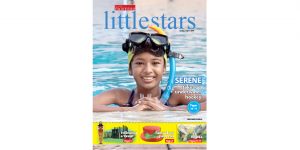 Apps for your studies!

March 8, 2020 byPavani Jayasinghe Munagamage No Comments
When it comes to studying in our day and age, internet, as well as technology, are hugely beneficial and popular methods. With internet and technology come new ways of learning (e-learning), with many