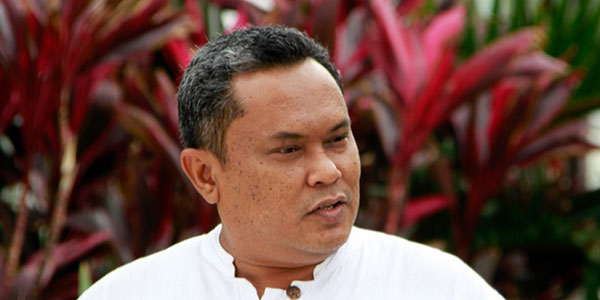 September 6, 2018 by Jennifer No Comments

Rashdy Ahmad, reputed holistic healing therapist, Reiki master and massage artist, is here in Sri Lanka from August 29 to September 8, with Chi, the luxury spa on the fourth floor of Shangri La, Colombo.

Coming from Malaysia, where his father was a policeman and the local village medicine man, who cured all ailments – from a snake bite to hysteria, and his mother, her mother before her and the ladies before them were all midwives, Rashdy was born and raised in a family of healers.

He learned the unspoken art of medical and healing massage from his grandmother from a very young age of 13 and was the go-to-guy amongst his sport-loving friends who knew his secret talent and cured them, when they sprained their ankles or broke their bones.

Due to pressure of modern-day society, where no family would want their daughter to marry a massage artist, he was forced to become an Engineer in Communications. He was in the field for two years, when he realised he absolutely hated it.  It was around this time that he discovered the amazing book, ‘Follow your heart’, by Andrew Matthews, which encouraged him to do what his heart was calling him to do.

So he quit his career as an engineer, and started working as a therapist, and slowly started building his name. However, as he was promoted as a manager, he realised that he wanted to be directly involved in treatments and healing himself. So he moved into the field of training, and became a visiting practitioner, travelling around the world.

Professionally in the field of massage therapy for 20 years, he travelled through the Americas, Asia, Africa and Australia, leaving a mark of his ‘healing hand’ wherever he went.

“I’ve travelled to so many countries, been around the world and visited so many cultures, but we are no different, no matter where we come from,” says Rashdy Ahmad.

Therapeutic Healing, where he combines deep tissue massage, soft tissue manipulation, Malay traditional massage and his years of experience and intuition to rectify a range of issues from injured muscles, joint aches, to skeletal or muscular problems and even emotional issues such as stress, lack of confidence and anxiety as well. Partly spiritual, his techniques vary on the range of medium to strong and he uses his entire body weight and whole of his arms to do these treatments.

He also offers the rare treatment of Energy Healing, which combines Reiki healing and involves the balance of energies which all humans are made of. Rashdy is able to draw on his intuitive skills as a Reiki master and balance out the negative energies that accumulate in the body due to external forces, simply by placing his hand over the body of an affected individual.

“We are all energy. This energy is individual to each person, but not different. As a healer, I am able to use my energy to balance out yours.”

“Why are you called the Healing Hand? Is it because your treatments are heavenly and somehow solve the issues people have?” we asked him.

Rashdy: “If I can send people to heaven, I would send myself first…” (Laughs).

“It was a name that I never made for myself. One of the beautiful names of Almighty God, I would never think to refer to myself in this manner. However, nothing is not from God as well. So that is how I like to think of it.”

Talking about his intuitive abilities, we asked him how he was able to read people in this manner. He feels he has honed this ability through his heritage, being brought up in a family of healing and through his work of energy, working with thousands of people, and healing their issues. It is this that allows him to identify the individual needs of clients and treat them, very differently from standard medicine and treatments.

“You have such a soothing voice and personality, talking to you, people feel much lighter, that their problems are melting away,” we told him

Rashdy: (Laughing) “You should see the way I talk to my children.”

Yudhanjaya and Ronnie nominated for the 2018 Nebula Award