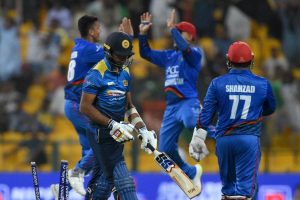 “It’s just the batting unit that let us down”

After the tournament-ending loss to Afghanistan in the Asia Cup 2018, Angelo Mathews rued the errors of the batsmen, putting the blame on the unit for the defeat.

The 91-run win on Monday, 18 September was Afghanistan’s first against the five-time Asian champions in one-day internationals. Sri Lanka, who had earlier lost their opening clash against Bangladesh, are now out of contention for the Super Four following their loss to Asghar Afghan’s men.

Afghanistan’s top-order provided them with a strong start with Mohammad Shahzad and Ihsanullah Janat adding 57 runs for the opening wicket, while Rahmat Shah, the No.3, top-scored with a 90-ball 72. Hashmatullah Shahidi’s 37 and handy contributions from the lower middle-order powered Afghanistan side to a competitive total of 249.

17 Sept. 2018 – Lose to both Bangladesh and Afghanistan and eliminated from Asia Cup 2018 first-round in UAE

They lost wickets from the beginning and were finally bowled out for just 158 in 41.2 overs.

“This was shocking from the whole team,” said Mathews after the match. “Even in the first game, we got all out for 150-odd. Congratulations to Afghanistan as they outplayed us.

“We got a good start [0/1 but then 54/1] but again lost our way in the middle overs. The bowlers did well, the fielding had also improved from the last match. It’s just the batting unit that let us down.

“We played better cricket in the later parts of the South Africa series. Just disappointing to see the way the boys went about it. We couldn’t handle pressure. Not passing 150 on both occasions is very shocking and disappointing.”

Afghan, the Afghanistan captain, was full of praise for his team for a match-winning all-round performance in their tournament opener.

“[It was a] very important game because Sri Lanka lost their first game. Credit to our batsmen, our openers, they played very well. Every batsman executed his plans,” said Afghan.

“Credit to our fielders who fielded very well. We want to win, show our abilities and talent. When you want to play to win, you play positively. Our spinners, batsmen and bowlers all did well. I would also like to say thanks to the crowd for their support.”

October 22, 2018 byRevatha No Comments
Rangana Herath, the most-successful left-arm bowler in Test history, will retire after the first Test in Galle, against touring England.