SL Army says not informed on suspension of peacekeepers 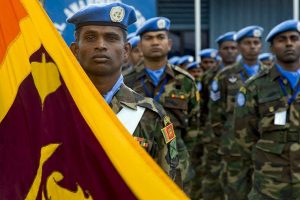 The Sri Lanka Army says it has not been informed of a decision taken by the United Nations(UN) to suspend accepting peacekeepers from Sri Lanka.

Military Spokesperson Brigadier Sumith Atapattu speaking to The Sunday Morning said the Sri Lanka Foreign Ministry had not officially informed the Military over the UN suspension of Sri Lankan peacekeepers.

In light of the appointment of Lieutenant General Shavendra Silva as Sri Lanka Army Commander, the UN Department of Peace Operations  yesterday declared that it was suspending future Sri Lankan Army deployments except where suspension would expose UN operations to serious operational risk.

“In light of the UN’s commitment to the highest human rights standards for all personnel deployed on UN peace operations, we have expressed our concern to the Government of Sri Lanka over the appointment of Lieutenant General Shavendra Silva to the position of Commander of the Sri Lanka Army, despite well-documented, credible allegations of his involvement in serious violations of international humanitarian and human rights law.” The UN said.

“We are grateful for these contributions to UN peace operations, particularly in some of the UN’s most complex missions.”

A Sri Lankan Army unit and individual officers currently serving with UN Peacekeeping will thus be repatriated, beginning of October, in accordance with their rotation dates and will not be replaced by Sri Lankan personnel.

May 1, 2020 byTSM Web Desk No Comments
A total of 9 Covid-19 cases have been reported so far today, raising the total number of Covid-19 cases in the country to 674.