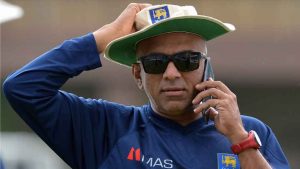 Sri Lanka Cricket has curtailed coach Chandika Hathurusingha’s role in team selection, removing him from his position of selector-on-tour effective immediately. Selecting the XI on tour will now be undertaken by the team manager and captain in consultation with the national selection committee.

“The team on tour shall be made by a committee comprising of team manager and captain in consultation with the national selection committee,” an SLC release said. “The majority decision of the manager, captain and members of the selection committee shall prevail on any selection made thereof.”

The previous SLC executive committee, headed by then SLC president Thilanga Sumathipala, had made Hathurusingha a selector-on-tour by way of a compromise. Shortly after being hired, Hathurusingha had asked to be made a fully fledged selector – a position he enjoyed when coaching Bangladesh – but SLC had to meet him in the middle as Sri Lanka’s sports law prevents a head coach of a national team from simultaneously functioning as a selector of that team.

Since then, while the team manager had remained chairman of selectors on tour as per the SLC constitution, the new position had nevertheless given Hathurusingha a level control over team affairs hitherto unseen for a SLC national coach. His tenure, however, has only had Sri Lanka perform in spurts, winning 14 and losing 24 of their 42 international matches across all formats under Hathurusingha.

According to SLC, the decision to now limit Hathurusingha’s powers was taken under the instruction of Sri Lanka’s sports ministry, which stated it was an effort to form “an effective and transparent selection mechanism”. An SLC source also noted that there is no provision within SLC’s constitution for the coach to be made a selector in any official capacity.

While ESPNcricinfo understands Hathurusingha will continue to be consulted in team selection, it remains to be seen how such a change in dynamic will be perceived by a coach for whom near-total control over team affairs was a prerequisite to taking the job.

April 4, 2019 byRevatha No Comments
The former Sri Lanka player had been charged for similar offences last year by the ICC on behalf of the Emirates Cricket Board