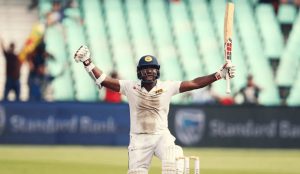 Meanwhile media asked from the Sri Lanka officials before their departure on Wednesday on what grounds Sri Lanka’s hard-hitting batsman Kusal Janith Perera was excluded from the National Test squad for the series against Zimbabwe.

Sri Lanka named a 15-man squad for their Test series in Zimbabwe without the dashing left-hander, whose match-winning knock in South Africa in 2019 is being talked about as the greatest Test innings of all time.

Perera’s omission from the squad has also prompted former skipper Mahela Jayawardene to weigh-in on the matter. Perera’s innings against South Africa saw Sri Lanka register a famous come-from-behind victory in Durban, with Wisden referring to the win as “one of, if not the, great overseas performances this decade,” and bestowed Perera’s knock against a strong South African pace attack as one of the best Test knocks of the decade.

De Mel said Perera was not in his best form during his last four innings against New Zealand. He also argued Perera played in South Africa last year when the regulars, Dinesh Chandimal and Angelo Mathews, were not playing for the team.

Saying they vehemently reject any kind of favouritism taking place in team selections, De Mel also added Perera was in a process of fully recovering from a back injury and is also unable to join the team as the wicket-keeper because the team’s regular keeper’s position is taken by in-form batsman Niroshan Dickwella at the moment.