Sri Lanka national cricket team returned from Pakistan Thursday, 10 October evening and upon their arrival at Sri Lanka Cricket at Colombo, spoke to the media with the cricket-board officials. 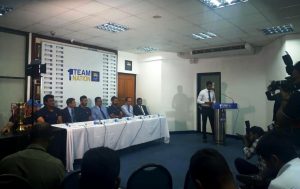 What I feel is when the players had to stay inside their hotel without their wives that can provide us good results. Pakistan is thankful for our visit there. It will create a situation where other teams, including European teams, will visit there for international cricket.

SLC thank the governments of both Pakistan and Sri Lanka. A young team coming up triumphant beating world’s number-one side three-nil in the T20s is a remarkable achievement.

The youngsters playing so well created a good headache for me. Minod Bhanuka, Bhanuka Rajapaksa, and Oshada Fernando grabbed the opportunities given to them with both hands. It was good that we gave them such a chance. After the Pakistan series, our bench strength has improved. Form matters. Therefore a few players who opted to be out of the Pakistan series may have to be left out for the upcoming Australia series. When new players enter the team, they have a different mindset. That’s different from senior players they employ a different mindset as they have got used to such situation.

The success in Pakistan T20 series was beyond our imagination. The fact that some of the seniors didn’t participate in the tour did not deter our performance. Some of the youngsters were talented as we knew from the beginning. But players like Bhanuka Rajapaksa surprised us by playing such good cricket.

At the end of the series, we felt it was so easy.