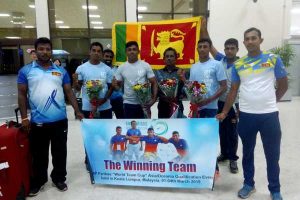 During the last two weeks, we discussed the evolution of international wheelchair tennis and its brief history in Sri Lanka. Within the short span of it here, through nearly two decades, Sri Lanka has had no less than four of her players in the top 100 in the world.

Efforts of Upali Rajakaruna, Dissanayake M. Gamini, Suresh Dharmasena et al. has given Sri Lanka a bronze medal at the last Asian Games in Indonesia, but the last mountain to climb in this sport has always been making it to the final round of what is known as the World Team Cup – the virtual annual World Cup of international wheelchair tennis.

The competition to make it to the World Team Cup finals, or the World Group, is always fierce. The World Group this year will be held in Israel in May. Sixteen nations will feature in this final competition. The 16 consists of the top 10 countries in the world and one qualifying country from each region of the world that is taking part in the preceding qualifying events. Those regions are Asia/Oceania, Europe, Africa, and the Americas. The last two slots of those 16 will be given to the host country (this time Israel) and a wild card is awarded by the tournament organisers, the International Tennis Federation (ITF), to a deserving nation at its discreet.

To qualify for the finals of any global team competition in present-day tennis is a great honour. It’s always a herculean task. None of the four junior teams from Sri Lanka (under 14 and 16) playing in similar annual team competitions, aiming to win a world title, has ever qualified for the World Group, or the final round, of their respective competitions.

This year’s Asia/Oceania Zone qualification round saw strong Australia and China taking part too. They were countries that have previously played in the World Group. This year’s World Team Cup qualifiers were held in Kuala Lumpur, Malaysia. Dharmasena, Gamini, and Suresh Ranaweera represented Sri Lanka. They were coached by Jagath Welikala. They were determined to break the hoodoo and make it to the World Group this year, a feat they had missed very narrowly on many occasions before. Apart from Australia and China, Iraq, hosts Malaysia, Sri Lanka, and Thailand also took part. Sri Lanka was pooled along with Australia and China in this year’s “Group of Death”.

But Sri Lanka was determined to do the unthinkable this time.

Incidentally, one of the world’s most respected wheelchair tennis coaches, Aad Zwan, who imparted his knowledge to Lankan players last year, had confidently predicted Sri Lanka could top the world in wheelchair tennis rankings at the rate they are improving. As a result, the Lankans were in an upbeat mood as they went into the regional qualifiers this year.

Sri Lanka sprang a great surprise in Malaysia. They beat both China and Australia to qualify for the finals of the Asia/Oceania qualifying competition. In the final qualifiers, they had to face hosts Malaysia. It is not easy to play a host team in a final however good you are. The crowd, the weather, the courts, and numerous other factors are always against a visiting team.

The Lankan wheelchair tennis team with grit and determination beat Malaysia to win the qualifiers. They thereby became the first Sri Lankan tennis team in the history of country’s tennis to qualify for the World Group of any kind of team competition ever.

This achievement should bring immense pride to every Sri Lankan, not the Sri Lankan tennis fraternity alone. The dedication and commitment these players are showing in their gruelling practices day in and day out are especially noteworthy in this context.

This writer can attest to the fact that these players work extremely hard in very trying circumstances with the facilities they have to achieve their best. The Sri Lanka Tennis Association (SLTA) should be commended for their magnanimous gesture in allocating courts for these players every weekday morning, free of charge. Not only that, the SLTA at all times gives them the maximum encouragement possible.

The sponsors should deserve special mention too in this regard for their support for the country’s wheelchair tennis.

Now, these players are hard at practice, getting ready for the much-anticipated World Group competition in Israel next May. Their main intention is to do their utmost best in representing Sri Lanka – with dignity and honour.

A curious fact encourages these players no end. Sri Lanka beat Japan in their group-stage matches last year. But because they lost another match, the Lankans could not make it to the finals. Japan went on to win qualification to the World Group. Then in the World Team Cup World Group finals, they went on to win the world championship!
Will history repeat itself? All of us Sri Lankans should hope and pray that it does.

August 28, 2018 byRevatha No Comments
The E-sport gold medal winner is found at the 18th Asian Games

March 20, 2019 byRevatha No Comments
The 2019 Indian Premier League gets underway this weekend