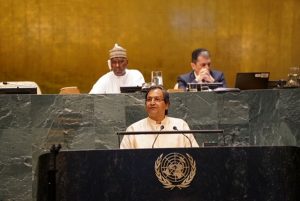 Sri Lanka urged the United Nations to respect domestic decisions taken by member states, warning that failing to do so would create distrust and jeopardise relationships among countries.

“It is vital, that primacy and respect be given to decisions taken by member states, regarding essentially domestic matters.” Foreign Secretary Ravinatha Aryasinha, speaking at the 74th session of the UN General Assembly said.

Aryasinha further stressed that, “UN policy implementers must refrain from being misled by entities with vested interests. The UN must also desist from making decisions without a valid consultative process, as its work has to be always member state driven.”

“Failure to do so will not only vilify this august body and negate the values that it represents, but will also break the trust of Member States, jeopardizing the partnership with the UN.” Aryasinha  warned.

Aryasinha also expressed Sri Lanka’s commitment to global peace and security further adding that it was looking forward to enhancing its contribution toward the UN peace keeping mission.

However he said, “Obstacles must not be placed on Sri Lanka’s long standing Peacekeeping contribution to the UN.”

His remarks came in the wake of the UN’s decision to ban Sri lankan peacekeepers as a result of the appointment of new Army Chief Major General Shavendra who is alleged to have been involved in serious human rights violations during the war.

April 22, 2019 byRandev No Comments
Prime Minister Ranil Wickremesinghe and other ambassadors and representatives discussed the present situation in the country at Temple Trees this evening (22).