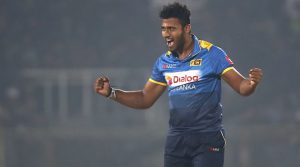 The Sri Lanka Cricket (SLC) board is to meet today to take a final decision on  Cricketer Shehan Madushanka who was arrested on a charge of possessing heroin.

An SLC official speaking to The Morning said Madushanka’s contract is likely to be suspended.

Madushanka was in possession of two grams and 700 milligrams of heroin when he was caught in the town on Pannala on May 23  during a nationwide curfew.

The 25-year-old was reportedly stopped by the police while he was driving his car with another person.

Following his arrest, he was remanded until June 02 by the Kuliyapitiya Magistrate’s Court.

The cricketer had picked up a hat-trick on his ODI debut against Bangladesh in a tri-nation tournament final in January 2018.

He has not played a single ODI since. However, he has represented Sri Lanka in two T20Is the same year but was ruled out ahead of Nidahas Trophy 2018 due to injury.

January 14, 2019 byEaswaran No Comments
A meeting between Sri Lanka and the International Monetary Fund (IMF) in Washington has been postponed, Minister of Economic Reform and Public Distribution Dr. Harsha de Silva said.

November 1, 2019 byTSM Web Desk No Comments
Bail for 12 people, including two assemblymen, who were charged with supporting and possessing items related to the Liberation Tigers of Tamil Eelam (LTTE) will be decided at the Malaysian High Court,