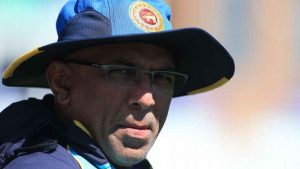 Sri Lanka Cricket has decided to terminate Chandika Hathurusingha’s contract as head coach, while Hathurusingha has moved for compensation through the Court of Arbitration for Sport (CAS), following months of deadlock.

Although SLC had suspended Hathurusingha as far back as August last year, they had continued to pay him for several months, while lawyers traded letters and the board sent Hathurusingha a list of alleged failings as head coach. The charges levelled by SLC include failure to adequately prepare the Sri Lanka side for various assignments, and failure to maintain good relationships with players.

The board has finally resolved to terminate Hathurusingha’s contract, but the possibility that they will have to pay Hathurusingha a substantial amount for early termination remains. His contract was due to run until December this year.

“At the last executive committee meeting, on Friday, it was decided that the contract would be terminated,” board CEO Ashley de Silva told ESPNcricinfo. “I can’t say by memory when we stopped the payments to [Hathurusingha], but I believe it was somewhere around October last year.”

The board’s decision came after CAS, a global sporting body that aims to settle disputes related to sports via arbitration, sent them a letter listing Hathurusingha’s demands. De Silva confirmed that SLC is bound to the CAS process, and the board is now understood to be required to respond. This is likely because Hathurusingha’s contract with the board had stipulated that CAS could become involved if something like an early termination did eventuate. CAS will facilitate arbitration, and will effectively function as the intermediary between the parties for as long as this process lasts.

Hathurusingha’s demands, conveyed to SLC by CAS, are understood to include not only loss of income from the early termination, but also compensation for damages to his reputation. He had remained in Sri Lanka through the early months of his legal tussle with SLC, but had returned home to Australia after the board’s payments ceased.

Hathurusingha is the third head coach in the last five years whose tenure with Sri Lanka was ended before the contracted term was served. Marvan Atapattu and Graham Ford were both elbowed out of the position in 2015 and 2017 respectively.

In 2013, SLC had also had to pay Geoff Marsh a substantial settlement after the board had terminated his contract early in 2012.

October 10, 2019 byRevatha No Comments
SL returns after their Pakistan tour, where they were given security equivalent to that is provided to heads of state, after recording their first-ever T20I series whitewash against Pakistan

November 28, 2018 byRevatha No Comments
This is the brand’s first foray into sports.