SLFP has been ruined: Fowzie 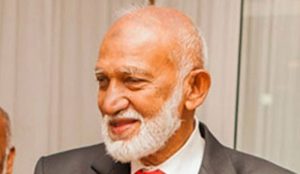 Parliamentarian A.H.M. Fowzie today said that disciplinary action must not be taken against him, but against the party members who ruined the Sri Lanka Freedom Party (SLFP).

However, MP Fowzie added that he has not yet received any disciplinary action letter for show cause.

SLFP General Secretary MP Dayasiri Jayasekara at a press briefing yesterday(4) announced that show-cause letters have been served to 5 National List MPs, namely Lakshman Yapa Abeywardena, Wijith Wijayamuni Zoysa, S.B. Dissanayake, Dilan Perera and A.H.M. Fowzie. The MPs have been given seven days to show cause on the matter.

September 24, 2019 byTSM Web Desk No Comments
The Elections Commission has announced that postal voting will take place on 30 and 31 October.

September 10, 2019 byTSM Web Desk No Comments
Wheat companies have agreed to sell wheat at the previous price during the cost of living committee meeting held today, Minister of Agriculture said.