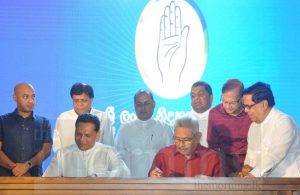 The agreement was signed between SLFP General Secretary Dayasiri Jayasekera and Rajapaksa.

Earlier, an MoU was signed between the SLFP and the SLPP. The Ceylon Workers Congress(CWC) also signed an MoU with the SLPP.

Despite concerns of accuracy govt. to continue dubious tests?

May 10, 2020 byTSM Web Desk No Comments
The Government is to continue to rely on PCR tests conducted outside the Ministry of Health, despite repeated warnings from medical laboratory experts on the lack of accuracy and false results.

December 30, 2019 byTSM Web Desk No Comments
The Swiss Embassy employee who was allegedly abducted has been granted bail by the Colombo Magistrate’s Court.