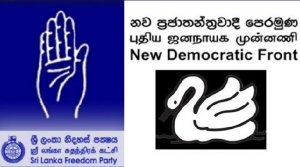 A group of dissident electoral organisers of the Sri Lanka Freedom Party (SLFP) are to form a separate political front in order to support the presidential candidature of New Democratic Front (NDF) candidate Sajith Premadasa.

Head of the Organisation for the Protection of the SLFP Rajika Kodituwakku said the dissident organisers would form a political front under the name “Sri Lanka Freedom Democratic Front”, which would sign a Memorandum of Understanding (MoU) with NDF candidate Premadasa and extend its support towards his victory.

Kodituwakku explained that a majority of the SLFP organisers were opposed to the move by the SLFP parliamentary group to extend the party’s support to the Sri Lanka Podujana Peramuna (SLPP) and its presidential candidate Gotabaya Rajapaksa.

“Out of 182 SLFP electoral organisers, 179 were opposed to supporting the SLPP, but the party has been pushed to support the SLPP. We will gather all SLFP organisers and work to defeat the SLPP and its candidate at the elections,” he said.

He added that a convention with the participation of all party organisers will be held this week to launch the Sri Lanka Freedom Democratic Front.

Meanwhile, SLFP General Secretary MP Dayasiri Jayasekara said that a majority of the dissident group of SLFP organisers were in fact not organisers of the party anymore.

“Most of them are no longer organisers of the SLFP and have even been unable to secure votes to enter their respective local government bodies,” he said.

He explained that the SLFP decided to support the SLPP presidential candidate since the party could not form an alliance with the United National Party (UNP) as it was against party policies and the SLFP was not in a position to field its own candidate.

“The party requested SLFP Leader President Maithripala Sirisena to contest, but since the President did not come forward, we had to make the next best choice as a political party while safeguarding the party’s identity,” Jayasekara said, adding that it was unwise to make political decisions based on individual preferences and that it should be based on politics and policies.

Meanwhile, The Sunday Morning learnt that former President Chandrika Bandaranaike Kumaratunga is in talks with several SLFP members to secure their support for Premadasa.

Kumaratunga has not been on good terms with the Rajapaksas and played a crucial role in brokering a split in the SLFP in 2014 which saw then SLFP General Secretary Maithripala Sirisena being nominated as the common candidate of the then Opposition United National Party (UNP)-led alliance.

When asked if he was aware of moves by Kumaratunga to broker another split in the SLFP, Jayasekara told The Sunday Morning that he was not aware and was certain she would not take such a step.

“I don’t think she will try to broker deals with SLFP members to support Sajith Premadasa. Anyway, I cannot comment on that. We will have to wait and see,” he said.

Former President Kumaratunga could not be reached for a comment.

Even before the presidential election was declared, some SLFP members extended support to the UNF while some obtained membership in the SLPP.

The SLFP later suspended the membership of five parliamentarians who crossed over and supported the SLPP and the UNP.

The party membership was suspended after a disciplinary inquiry was conducted by the SLFP.

In his letter, Jayasekara reminded Kumaratunga that she had formed a coalition with the Janatha Vimukthi Peramuna (JVP) when she was President, despite the JVP being linked to the death of her husband.

Earlier, Kumaratunga had sent a message to Jayasekara, questioning the decision to back Rajapaksa.

She said the decision was a betrayal of the SLFP, adding that most SLFP organisers did not back the decision.

In response to the message by Kumaratunga, the SLFP General Secretary said in a letter that he was extremely saddened by the WhatsApp message that was communicated to him personally, which later appeared on a number of social media platforms.

Jayasekara said that primarily, the intention of the SLFP in arriving at its decision to support Rajapaksa at the upcoming presidential election was based on upholding the values and integrity of the SLFP and under no circumstances would they compromise the very party founded by Kumaratunga’s father S.W.R.D. Bandaranaike.

“The SLFP was founded on the premise of progressive socioeconomic policy to which I am bounded from the bottom of my heart and as the General Secretary of the party. Therefore, madam, in light of the policy framework and the founding principles of the party we are not in a position to support the UNP (United National Party). The policies and framework of the UNP is contrary to our party policy. We cannot support a party that promotes the views and policies that are based on neoliberalism,” Jayasekara said.

He also noted that the present downfall of the SLFP was due to the coalition arrangement with the UNP and the party, which was once the number one force in the country, had been downgraded to third in a span of five years.

“Furthermore, madam I cannot embark on a decision based on personal views, we represent a party and the very ethics of a progressive and remarkable Sri Lanka. It is our responsibility to the people of Sri Lanka irrespective of party and personal politics to see a country prosper,” the letter read.

He also noted that although former President Mahinda Rajapaksa was instrumental in splitting the SLFP, the country struggled to see progress with the “Yahapalana”Government due to the policy framework of the UNP.

Jayasekara reminded Kumaratunga that she, in 2000, formed an interim government with the JVP and also formed a coalition government in 2004 in the interest of the country.

“Moreover, you personally drew the symbol of the ‘bulath kole’ on a paper to form the coalition with the JVP. In history we embarked on bold decisions to progress our country leaving aside personal differences uniting and progressing a country. This is the utmost we can do as a human being,” he said.

August 24, 2020 bythemorningeditor1 liberty No Comments
Tackling bribery and corruption in sports will be a key feature in the new Sports Act, The Morning learnt.