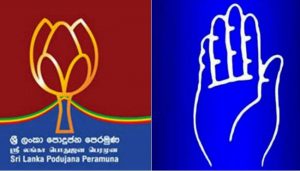 The Sri Lanka Podujana Peramuna (SLPP) decided to continue talks with the Sri Lanka Freedom Party (SLFP) despite the SLFP not voting against the 2019 Budget.

The SLPP earlier warned that talks to form a new alliance will be at risk if the SLFP did not vote against the 2019 Budget of the UNP-led Government.

However, SLPP Chairman Prof. G.L Peiris told The Sunday Morning yesterday that the party decided to participate in the next round of talks with the SLFP scheduled to be held on 10 April.

Prof. Peiris stressed that the party was disappointed to see the SLFP abstaining from voting during the Budget which indirectly meant that the SLFP could not stand against the UNP.

Meanwhile, speaking to The Sunday Morning, SLFP General Secretary Dayasiri Jayasekara said that the decision the party had taken to abstain voting for the Budget would not affect the discussions between the SLFP and SLPP.

Justifying the party’s decision, MP Jayasekara said the decision was taken considering the fact that the SLFP’s Leader was also the leader of the country and there were several ministries under him and so defeating the Budget would also affect the President.

“If we go against the allocations, there will definitely be an issue. This Budget can’t be defeated even if the SLFP voted against it,” he said.
Jayasekara said the President had instructed the party not to vote for the Budget. Therefore, the party decided to abstain.

October 14, 2019 byTSM Web Desk No Comments
All universities will resume academic activities today after the  33-day strike by non-academic staff came to an end last Friday.