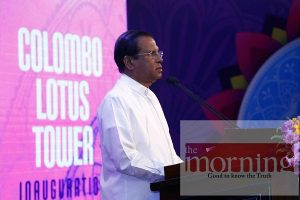 The President speaking at the opening ceremony yesterday said in 2012 a Chinese company; Aerospace Long-March International Trade Co. Ltd (ALIT) had been paid a sum of Rs. 2 bn by the Rajapakse Government as part of the deal for the lotus tower project.

However, Sirisena said once he became President there was no sign of the said Chinese company nor the Rs. 2 bn.

SLPP has denied the President’s allegations in parliament and at a press briefing today.

SLPP member Rohitha Abeygunawardena questioned why the government did not take any action in the last four and half years if such claims were true. He said up to date no legal action has been taken either.

He said according to the auditor general the good governance government had faced losses as a result of halting the construction of the lotus tower project.

Abeygunawardena said the Rajapakse’s government had completed 80% of the lotus tower by the time the ‘yahapalana’ government took over.

February 1, 2019 byEaswaran No Comments
A proposal has been handed over to Speaker Karu Jayasuriya to form a National Government.

March 3, 2020 byTSM Web Desk No Comments
Sri Lanka has rejected the report of Ahmed Shaheed, Special Rapporteur on freedom of religion or belief following his visit to Sri Lanka from 15 to 26 August 2019, which was presented to the UN Human