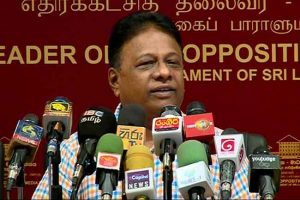 The SLPP media unit has denied any connection with the poster campaign bearing faces of M. L. A. M. Hizbullah and SLPP presidential candidate Gotabaya Rajapakse.

The SLPP Media Spokesperson Dalas Alahapperuma issuing a press statement said the campaign was organised by the camp of the opposition candidate.

Alahapperuma added that the campaign was initiated to defame Rajapakse.

He said the attempt was a clear demonstration of the opposition’s tension in the face of upcoming defeat at the presidential poll.

Former Eastern Governor Hizbullah is contesting the forthcoming presidential election as an independent candidate under the symbol of the ‘Camel’.

May 10, 2019 byRandev No Comments
The Colombo Fort Magistrate's Cout has ordered the Criminal Investigation Department (CID) to verify the identities of the Easter Sunday suicide bombers through DNA tests.

AG makes submissions to SC on dissolution of Parliament

December 5, 2018 byEaswaran No Comments
The Attorney General informed the Supreme Court (SC) today that it has no authority to decide on the dissolution of Parliament.