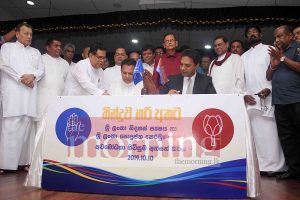 The agreement stipulates that the SLFP extends its support to the SLPP presidential candidate Gotabaya Rajapaksa at the forthcoming presidential elections.

According to Jayasekara the collaboration between both parties will generate 6.5 million votes in the presidential polls scheduled to be held on 16 October.

The SLPP will sign two more Memoranda of Understanding in the coming days with the SLPP presidential candidate Gotabaya Rajapakse and leaders of the SLPP.

December 26, 2019 byEaswaran No Comments
A rare solar eclipse and the last one for the decade, was witnessed in most ports of Sri Lanka today.

Passengers stuck in lift due to power failure at BIA