Snipping the layers to uncover the reality: The beauty industry during Covid-19

The beauty industry during Covid-19

Covid-19 has wreaked havoc in many of the industries globally. Many institutes and companies have shut down temporarily, and some even permanently. As we are well aware, within Sri Lanka, some of the main sectors affected by the pandemic and talked about are the tourism, agriculture, and educational sectors. However, there are many other sectors that have also been greatly affected but have gone unnoticed, and one such industry is the hair and beauty industry.

Many salons had to close their doors as safety became the number one priority. However, as the curfew has been lax the past couple of days, salons have reopened their doors, but at a small price of course.

Veteran in the industry, Ramzi Rahaman spoke to us about the realities of the pandemic and the aftermath of curfew. Rahaman had a rather humble beginning as he began his career in 1974 in a small salon in Barnes Place. Now, he is a well-renowned figure who has four decades of experience under his belt. He also caters to a large and prestigious clientele, and has received many accolades in recognition of his talents. 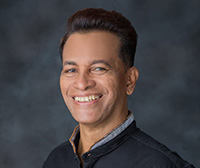 “To me, personally, running this establishment with these new Covid-19 rules is not altogether new,” Ramzi stated. He said that many establishments in this particular industry are probably finding it difficult due to the fact that they were probably not abiding by the rules of cleanliness or maintaining hygiene to begin with.

In fact, he educated us by elaborating that the basics in this industry involve maintaining cleanliness. “Overseas, you are put to sweep and clean over a year, I believe,” he noted, adding that many of the younger hairdressers in this industry are exceptionally good and extremely creative. However, he feels as though they have lost the “initial path”.

“A salon business is much like visiting a hospital; we have to be careful. The reason why people would revisit a salon is not your talent alone, but also the safety measures you maintain, how you handle a client, first impressions, and such. Now with Covid-19 on the rise, cleanliness and hygiene has become number one, of course,” he explained.

The process is tiring but rewarding

Ramzi also went on to say that the client is not the only one at risk here; even the hairdressers and beauticians are taking a huge risk. “We do not know where they come from and that puts us at risk as well,” he added.

It is an absolute necessity that clients have an appointment now as the salons cannot take in more than one client at a time under the set guidelines. “What did shock me though was that the clients were all actually rather co-operative and came on time and some even early,” he said humorously. Moreover, in an instant where the client was too early, he had informed them that they would call once they reached the salon and were informed to stay out until the salon had been cleaned up.

They make sure the place is properly sanitised before the client can enter the premises. In fact, unlike before, there is a particular disinfectant that needs to be used for the floor. Thereafter, it is necessary for them to disinfect/sanitise the counters, chairs, and even the brushes and scissors they use.

“The scissors need to be cleaned and sanitised, and we have to immediately tissue it. We clean it with a tissue because otherwise it could damage the instrument.” Furthermore, each stylist has a separate set of equipment, as they cannot use the same instruments as previously done.

Ramzi explained that they have to be careful as even the clients observe these simple measures. They are under constant scrutiny. Even after the client is gone, they make sure everything is in order. The shampooing basins, which generally were not washed in a particular way earlier, are now cleaned as per the regulations.

He confessed that the process could be fatiguing and wear a person out, but in the end, it would be quite rewarding as seeing the satisfaction of the client meant a lot. Furthermore, something rather interesting to note was that he was getting clients that had never come to his salon before, who asked if his salon was maintaining the hygiene regulations.

With regard to clients, Ramzi also explained that they too have to follow certain procedures before entering. “They (employees) have to wash their hands from the tap outside, where they can wash their feet too before entering. In addition to this, they have to leave their footwear outside. They have the option of either coming in barefoot or wearing the slippers that have been made available for them at the entrance,” he explained.

When asked as to how certain salons were able to reopen, Ramzi said: “Before anything, the Ministry of Health and the public health inspector (PHI) had to give us approval to reopen.” In fact, it had taken him approximately five days to get his own approval as he had to “do up” his place.

He even went as far as to get new towels to make sure the same towels are not used. Furthermore, they had to make sure that the counters were not overlapping each other. Moreover, they had to get the proper disinfectant for the equipment and they could not use any random disinfectant. He stated that getting these cost an arm and a leg and it could be difficult for those just starting up.

The only major difference Ramzi could note personally was the way he greeted people. He noted that he had to maintain his distance whereas he would generally warmly greet his clients. “You see, we have to adapt and change for the next six months or a year. At first, it was a bit of a nightmare to think of it, but now I enjoy it. I am gradually learning to enjoy it as well because if you enjoy your work, you do it well,” he said.

While Ramzi is a perfectionist by nature and does try his best to see that things are nothing but smooth sailing, he had to preface that mistakes can happen. This is especially true when clients do not divulge full details. “Some clients are not honest with their hairdressers and do not share their details if they have any ailments, which is risky under the current context.”

In these situations, mistakes and accidents can happen, even with the most experienced of hands.

“I and a few others in the industry met officials of the World Health Organisation (WHO) and Minister of Health and Indigenous Medical Services Pavithra Wanniarachchi and explained the situation. They were rather concerned and even tried to restrict us from dying hair. So we had to explain and tell them that we would not be getting too close to the client during this procedure. Of course, we are not allowed to do facials or waxing as we would be getting too close to the client,” he informed.

He also stated that Covid-19 has most definitely had an impact on the industry. Nonetheless, it is the newly established salons that are probably rebelling and not following the rules and regulations. Due to this, Ramzi felt as though it was a great idea that the PHI did regular visits, as then people would be more inclined to obey the rules.

A lesson from a curse

While Covid-19 is not a cause to celebrate, Ramzi felt as though we could all learn a lesson from this. “These rules and regulations in maintaining cleanliness should not be something new. But because Sri Lanka in particular lacks discipline, it has become something new for us. Overseas, it is a different story where they generally maintain these hygiene levels. So all in all, I think we can all learn something from this.”

Due to this pandemic, people are more cautious and are thinking of new ways and means to adapt to, overcome, and even thrive through this difficult period. Ramzi did admit that it would be rather difficult for salons to generate the normal level of profit as additional expenses have risen.

Hence, he suggested that profit-generation should not be the main focus right now and that salons should be more focused on how to survive and revive the business. “If a person is honest and disciplined in what they do, they can go forward. After all, slow and steady wins the race,” he encouraged.

Furthermore, he stated that the salon industry’s main priority is to control disease and infection from spreading at this point in time. “One careless action could cause serious injury or illness. Being in this industry can be fun and rewarding, but it comes with a great responsibility. It’s not just doing a beautiful haircut; all these factors make your salon a good salon. Even after four decades, I am still learning,” Ramzi concluded. 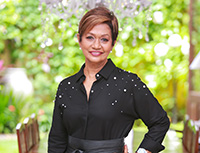 To gauge as to whether these statements were a commonality in the industry, we also had the privilege of speaking to yet another industry bigwig, Ramani Fernando.

“We started work from the middle of last week because we had to get permission from the PHI and the Ministry of Health ,” Ramani began. Additionally, the PHI and the Ministry had to inspect the area and see if the hygiene standards were on par and then give their approval. “It is quite challenging because the protocol is quite a lot. But anyway, even though the first few days were a bit disorienting, we are gradually adapting to it,” Ramani noted.

She also mentioned that clients are extremely receptive and gave some encouraging feedback, which, according to Ramani, had been due to the fact that they did their utmost in taking the necessary safety measures by sanitising the area, checking the temperature (of employees), etc.

Furthermore, she briefly mentioned that clients are only allowed four services – namely, haircuts, hair colour, manicure, and pedicure. Due to this, she admitted that it is somewhat hard to sustain just by offering those services as rent is pretty high in hotels. She also stated that not all Ramani Salons are functioning at the moment, except for a few. Moreover, the salons in operation do not run at full force, but on a 50%, roster basis as they have to think about social distancing.

Meanwhile, a director at Salon Romany shared: “It has impacted us rather adversely as we do not even get a return on what we have invested.” He went on to say that sometimes clients are unwilling to come to the salon as the media had highlighted the fact that someone carrying the virus was at a salon. Furthermore, they too make sure that the premises are sanitised before the entrance of a new client.

Hopefully, after the dust settles, the beauty and hair industry will rise again to its full glory with many lessons learnt in the process.

September 22, 2019 byThe Sunday Morning No Comments
In 2018, Mövenpick Hotel Colombo, a relatively newborn in the hotel industry of Sri Lanka, having commenced operations in 2017,

According to Matthew premieres

December 2, 2018 bythemorninglk No Comments
A tale that captures the despair of sexual abuse, exorcisms and the all too human motives behind murder.