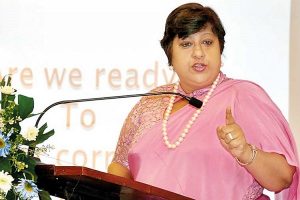 The Public Service Commission (PSC) has interdicted Solicitor General Dilrukshi Dias Wickramasinghe with immediate effect over an alleged incriminating tele conversation with Avant-Garde chairman Nissanka Senadhipathi.
The Attorney General yesterday referred the matter of the leaked voice recording to the Public Service Commission (PSC) for preliminary investigations.
Senadhipathi who is allegedly receiving medical treatment in Singapore, released an audio clip of a tele conversation that discussed the case filed by the Bribery Commission against Avant-Garde Maritime Services .
In the recording, the female voice purported to be Wickramasinghe’s can be heard saying “I know how to break the law and make the law.” She also expressed her regrets over filing the Avant-Garde case while blaming the country’s disorderly politics as the reason behind the case.
So far Wickramasinghe has not denied the conversation between her and Senadhipathi.
President Maithripala Sirisena, Prime Minister Ranil Wickremesingh and Justice Minister Thalatha Athukorale have also voiced their opinions of the issue.
Tweet
Share
Pin
Share82
82 Shares

November 11, 2019 byTSM Web Desk No Comments
Two death row inmates today launched a protest on top of the roof of the Welikada Prison complex demanding that they be granted presidential pardon.

The railway strike came to an end today with railway trade unions saying they had reached an agreement following talks with President Maithripala Sirisena. The strike was launched on Wednesday over demands for a higher salary and railway passengers staged a protest blocking the street opposite the Fort railway station[…]