October 2, 2019 by Charindra No Comments 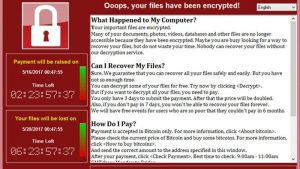 Sophos (LSE: SOPH), a global leader in network and endpoint security, has published WannaCry Aftershock, a report on what happened to the infamous WannaCry malware, following the worldwide attack that began on May 12, 2017.

The research by SophosLabs shows that the WannaCry threat remains rampant, with millions of infection attempts stopped every month, and that while the original malware has not been updated, many thousands of short-lived variants are in the wild.

The continued existence of the WannaCry threat is largely due to the ability of these new variants to bypass the ‘kill switch.’  However, when Sophos researchers analyzed and executed a number of variant samples, they found that their ability to encrypt data was neutralized as a result of code corruption.

Because of the way in which WannaCry infects new victims – checking to see if a computer is already infected and, if so moving on to another target – infection by an inert version of the malware effectively protects the device from being infected with the active strain. In short, new variants of the malware act as an accidental vaccine, offering still unpatched and vulnerable computers a sort of immunity from subsequent attack by the same malware.

However, the very fact that these computers could be infected in the first place suggests the patch against the main exploit used in the WannaCry attacks has not been installed – a patch that was released more than two years ago.

The original WannaCry malware was detected just 40 times and since then SophosLabs researchers have identified 12,480 variants of the original code. Closer inspection of more than 2,700 samples (accounting for 98 percent of the detections) revealed they had all evolved to bypass the ‘kill switch’ – a specific URL that, if the malware connects to it, automatically ends the infection process – and all had a corrupted ransomware component and were unable to encrypt data.

In August 2019, Sophos telemetry detected 4.3 million instances of WannaCry. The number of different variants observed was 6,963. Of these, 5,555 or 80 percent – were new files.

Sophos researchers have also traced the first appearance of today’s most widespread corrupted variant back to just two days after the original attack: May 14, 2017, when it was uploaded to VirusTotal, but had not yet been seen in the wild.

“The WannaCry outbreak of 2017 changed the threat landscape forever. Our research highlights how many unpatched computers are still out there, and if you haven’t installed updates that were released more than two years ago – how many other patches have you missed? In this case, some victims have been lucky because variants of the malware immunized them against newer versions. But no organization should rely on this. Instead, standard practice should be a policy of installing patches whenever they are issued, and a robust security solution in place that covers all endpoints, networks and systems,” said Peter Mackenzie, security specialist at Sophos and lead author of the research.

How to protect against WannaCry malware and ransomware in general

Verify if your computers are patched against the EternalBlue exploit used in WannaCry by following these instructions: How to Verify if a Machine is Vulnerable to EternalBlue – MS17-010

There is no silver bullet to security, and a layered security model is the best practice all businesses need to implement

February 3, 2019 bythemorninglk No Comments
Distilleries Company of Sri Lanka (DCSL) said that it was compelled to raise the prices of its arrack products due to the increased cost of production brought about by the depreciation of the rupee.