Soulboner: The newest brand for the in crowd

Soulboner is a new casual streetwear label with fun built into its core. Founded in December 2019, the brand offers simple collections of t-shirts and crops that embody the cool, quirky spirit of its team and market.

The Morning Brunch spoke to Soulboner Founding Director Deelika Fonseka to learn more about Soulboner and its journey.

The concept of Soulboner plays heavily off its founding team, a group of young, creative, and vibrant individuals with quirky personalities and dynamic points of view who want to feel comfortable while looking good.

The team comprises Fonseka, Head of Fulfilment Lina Sharnooz, and Head of Design Sherwin Raj. These three young entrepreneurs are all under 25 years old.

Soulboner’s founding team handles all aspects of the brand themselves; from concepts and art direction to content creation and also marketing and dealing with customers, making sure the brand stays authentic on all fronts.

Soulboner launches new collections every two months, doing a single run of production to maintain the exclusivity of Soulboner’s products.

Getting Soulboner up and running

The journey to establishing Soulboner has been an organic and fairly long one, Fonseka said. There was no epiphany or noticeably unique market gap that led to its creation. It was a concept that slowly grew.

The name Soulboner came about when Fonseka was visiting Pettah with a friend when working on a personal project, Champions of Pettah, a photographic documentation of the diverse people of Pettah. On one of his forays into Pettah, Fonseka and his friend came across a small out-of-the-way shop where they bought sausage buns that turned out to be amazing, if not sinfully good; his friend then commented that it was true food for the soul. Soulboner as a name came to Fonseka as he was leaving the shop, which he filed away for the right time.

Flash forward a year, the Soulboner team decided it was time to launch, picking t-shirts and crops as their initial offering as a cool, casual, and climate-friendly alternative to conventional streetwear that the young Sri Lankan customer would appreciate. 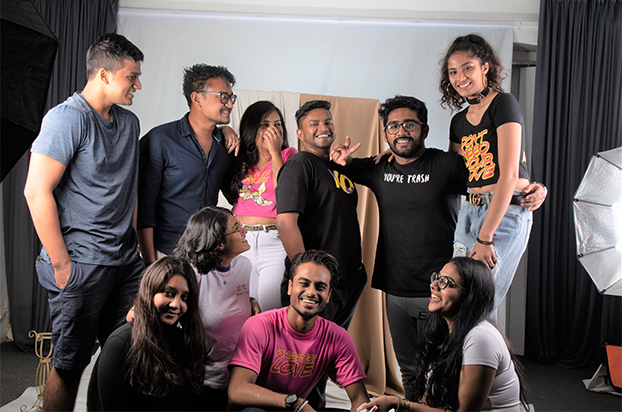 Behind the scenes at a Soulboner shoot

Launching in December 2019 as an exclusively online brand, like all brands, Soulboner had to adapt in the face of the Covid-19 pandemic. After ceasing deliveries for almost the entire month of April, the Soulboner team decided to launch a new collection in May on a pre-order basis. They received an overwhelmingly positive response, selling out to capacity in two weeks, after which they launched a clearance sale of the previous collections at discounted prices to help meet demand.

Fonseka commented: “Capitalising off our customers during an already challenging time was not our priority. It was about catering to our audience, most of whom are 15 to 23 years old and, in many cases, depend on their parents for disposable income.”

Launching their website in the middle of lockdown, Soulboner found an unexpected following on the popular social media platform TikTok, with a number of people purchasing Soulboner products specifically for use in making content for TikTok.

Soulboner’s biggest priority is surviving as a new brand while maintaining their voice. It is easy for businesses to get lost in the market, and Soulboner wants to find and build the right following in the local market and hopefully experiment with retailing in Sri Lanka before taking the brand global.