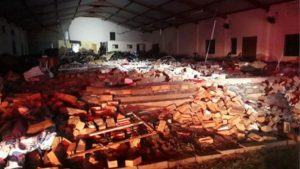 At least 13 people have died and many were injured when a wall collapsed in South Africa at the start of an Easter service at a Pentecostal church.

Emergency services said that 29 people were rushed to hospital after the collapse in the coastal province of KwaZulu-Natal.

A local police spokesperson linked the tragedy to heavy rainfall in the area around eMpangeni on Thursday night.

Local reports said some people had been sleeping when the brick wall fell.

The wall at the front of the Pentecostal Holiness Church collapsed at the start of what had been planned as a weekend-long service to commemorate the Christian festival of Easter.

On Friday, a special prayer service was held in a large tent in front of the church, reports the eNCA TV station. (BBC)

February 27, 2019 byRandev No Comments
US President Donald Trump has arrived in Vietnam ahead of his second summit with North Korean leader, Kim Jong-un.