Spotlight on the Bathiudeen brothers

The hunt for MP Rishad Bathiudeen was on last week with authorities combing the city to carry out his arrest in accordance with the Attorney General’s (AG) instructions, while investigations into his brother Riyaj Bathiudeen were still underway from various quarters. 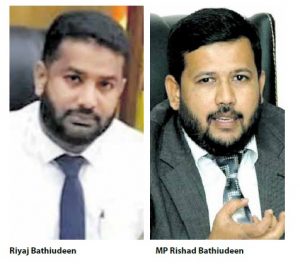 On 29 September, Riyaj Bathiudeen was released from police custody after being arrested six months prior for his alleged involvement in the 2019 Easter Sunday attacks.

Objections to his release were quick to come with the Catholic Church being one of the first to voice its concerns.

Speaking at a media briefing on 3 October, Archbishop of Colombo Cardinal Malcolm Ranjith said that he was disappointed over the release of Bathiudeen sans proper legal proceedings.

“The victims of the Easter Sunday attacks are disappointed and saddened by the slow progress of the investigations and they are expecting that justice will be meted out to them,” he said.

On 6 October, Minister of Irrigation and State Minister of Internal Security, Home Affairs, and Disaster Management Chamal Rajapaksa informed Parliament that Bathiudeen had been released from the custody of the Criminal Investigation Department (CID) due to the lack of evidence to prove that he aided and abetted in the Easter Sunday bombings.

“Riyaj Bathiudeen was arrested on 14 April 2020 on suspicion of his connections with Insaf Ahmed, the terrorist who blew himself up at Cinnamon Grand Colombo. According to the call records, there were 17 calls made by the suspect to the terrorist.

“The suspect had been detained under the provisions of the Prevention of Terrorism Act (PTA) for three days for questioning and thereafter obtained the permission of courts twice for three months each. The investigators had found that the suspect and the terrorist had no terror links and that the calls had been made for business purposes. The last call they had made was three months prior to the attacks. However, if there is new evidence, he would be arrested again. His release does not mean he is freed from all charges,” the Minister of Irrigation noted.

However, on 10 October, a letter was handed over to both President Gotabaya Rajapaksa and Prime Minister Mahinda Rajapaksa with the signatures of some 100 government-rank MPs opposing the release of Riyaj Bathiudeen.

AG’s Co-ordinating Officer State Counsel Nishara Jayaratne told The Sunday Morning that the AG had noted during the meeting with the CID officials that Riyaj Bathiudeen’s release had hampered investigations.

The AG had then given written instructions to the CID on further investigations and special measures that need to be followed.

Thereafter, on 12 October, Riyaj Bathiudeen wrote to President Rajapaksa over his release and pointed out that calls for his re-arrest were politically motivated.

“After being thoroughly satisfied of my innocence, the CID released me from custody on 29 September 2020. There is nothing sinister; as is suggested by interested parties in the fact that the CID released me from custody without producing me before the Magistrate. Indeed, the learned Magistrate had previously made an order that the persons held in custody pending investigations could be released by the CID on the CID being satisfied that there was no evidence to warrant their continued detention. I wish to humbly submit that the demands for my re-arrest have been orchestrated due to political and communal reasons. I am confident that Your Excellency would not be influenced by such extraneous considerations,” the letter addressed to President Rajapaksa stated.

Meanwhile, on Tuesday (13) the AG issued directives to arrest MP Rishad Bathiudeen on charges of criminal misappropriation of public funds and violation of election laws with regard to the transportation of internationally displaced persons (IDPs) in Ceylon Transport Board (CTB) buses to vote at the 2019 presidential election.

Police Media Spokesman DIG Ajith Rohana told The Sunday Morning that investigations into Riyaj Bathiudeen were still being conducted by the CID.

“We have still not been able to locate and arrest him. We believe he is hiding and evading the Police.”

Meanwhile, investigations of the Presidential Commission of Inquiry (PCoI) probing the Easter Sunday terror attacks are continuing as well.

Fernando refuted claims made by the former President and asserted that he had never received instructions from the latter to arrest National Thowheed Jamaath Leader Zahran Hashim.

He also charged that the former President should have been aware of a possible terrorist threat and as such, decided to leave the country at the time.

Former Prime Minister Wickremesinghe alleged during his testimony before the Commission last week that the weekly meetings of the National Security Council were discontinued after the new Government came into power in 2015.

Former President Sirisena told the PCoI that he had not invited former Prime Minister Wickremesinghe to the National Security Council meetings as it was not a mandatory requirement.

The former President also claimed that it could not be concluded that the activities of Islamic terrorists were now over, considering the fact that the Islamic State had claimed responsibility for the Easter bombings and their terror activities were still being carried out around the world.

The PCoI is to conclude its proceedings by the end of October.

Secretary to the PCoI investigating the Easter Sunday attacks Buwaneka Herath said that the Commission’s term ended on 20 December and that they would submit a report to the President before or by that date.

“20 December is the last date of the Commission’s functions. Our target is to complete all proceedings by the end of this month. Thereafter, we hope to compile and present the report by 20 December,” Herath noted.

February 10, 2019 bythemorninglk No Comments
Kerawalapitiya to get all-clear despite objections.