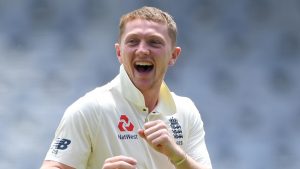 ‘Offie’ Dom Bess records his best in career so far

Sri Lanka, batting first after winning the toss, made a mediocre 135 all out in mere 46.1 overs –the lowest by Sri Lanka on their first innings ever in an otherwise victorious venue for the hosts– just before tea on the first day of the first cricket Test against England in Galle on Thursday (14).

Stand-in skipper Dinesh Chandimal top-scored with a 71-ball 28. Angelo Mathews made 27 while Dasun Shanaka batted out for 48 balls for an innings of 23.

England off-spinner Dom Bess got five for 30, his second five-for in Tests, while Stuart Broad got three wickets for 20.

Wait till Kiwi series is over, SLC requests Harin

August 2, 2019 byRevatha No Comments
SLC Ex Co on Friday, 2 Aug. made an appeal to the Sports Minister Harin Fernando to give time till the completion of the Kiwi series to make changes in the national coaching staff