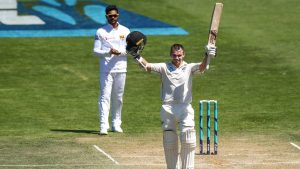 In six Tests at the Basin Reserve, Sri Lanka have been at the receiving end of four double-hundreds. Martin Crowe, Lou Vincent and Kane Williamson had done it before, and on Monday it was Tom Latham’s turn. Having gone past 200 for the first time in his Test career, he went on to finish on an unbeaten 264, becoming the first New Zealand batsman since Glenn Turner in 1972 to carry his bat through a completed Test innings.

Latham’s efforts earned New Zealand a 296-run lead and set them up to push hard for an innings win. By the end of day three, that outcome looked even likelier as Sri Lanka, needing to negotiate 14 overs until stumps, lost three top-order wickets to the swing and cunning of Tim Southee and Trent Boult.

Boult struck first, straightening one along a stump-to-stump line to have Danushka Gunathilaka lbw playing around his front pad. Then, Southee, having bowled largely outswing until then, got one to nip back in off the surface and breach Dhananjaya de Silva’s defensive gate. When Dimuth Karunaratne fell to a top-edged hook for the second time in the match, Sri Lanka were 13 for 3. Kusal Mendis and Angelo Mathews saw out the last 5.4 overs of the day, adding only seven runs to Sri Lanka’s score, and the pressure from New Zealand’s quicks will likely remain as intense when play resumes tomorrow morning.

Overshadowed by Williamson for much of the second day, Latham eased himself into the spotlight with a classic Test-match innings that turned a strong position at the start of the day into an unassailable one by the time New Zealand were bowled out.

There were three distinct phases to his batting on day three. While quick to put away anything loose, he was largely watchful in the first session, often leaving good-length balls inches wide of off stump, even when Suranga Lakmal was angling them into him from around the wicket. After lunch, as the double-hundred neared, he gathered his runs unobtrusively against well-spread fields, scoring at a strike rate of nearly 56 even while only hitting two boundaries in the session. Then, post-tea, with the lower order for company, he widened his range of shots to score his last 40 runs off only 38 balls.

The day began brilliantly for Sri Lanka, with Dimuth Karunaratne’s stunning reflex catch at short leg sending back Ross Taylor in the first over of the morning, fast hands somehow intercepting a full-blooded flick near his left shoulder.

That, though, was Sri Lanka’s only success of the session, as Latham and Henry Nicholls settled in calmly on a pitch that had flattened out considerably since the first morning. The only moments of anything approaching panic came when the unflagging Lahiru Kumara found the edges of both batsmen – Latham first, then Nicholls – with his extra bounce in his second spell of the day. The match situation, however, limited the number of catchers Sri Lanka could employ behind the wicket. The first edge flew through the vacant gully region, which prompted Dinesh Chandimal to move his second slip there, and the second edge promptly shot through the newly created gap.

Latham, certainly, had earned the right not to have an extra man in the cordon. He was batting on 136 when he played that uncharacteristic jab away from his body, and until then had been inch-perfect with his judgment outside off stump.

This didn’t mean Latham didn’t pounce when the quicks over-pitched, even marginally. His driving – always meeting the ball right under his eyes, with a punchy, full-faced finish – was a feature of the morning’s play, particularly to the right of mid-off. He kept finding that gap with such regularity that Sri Lanka eventually stationed their extra-cover straighter, almost as an auxiliary mid-off.

At the other end, Nicholls carried on the form he had shown during his triumphant tour of the UAE, chugging along at a 60-plus strike rate and looking Latham’s equal at driving off the front foot. His favoured area, however, was straight back past the bowler – three of his boundaries came in that direction, two off the quicks and one after a foray down the wicket to Dilruwan Perera’s off-spin. There was also a withering pull shot off Kumara, a strong roll of the wrists ensuring the ball stayed down despite being met above shoulder height.

Nicholls fell near the start of the second session, soon after reaching his half-century, holing out to long-on while trying to go after Dilruwan. Kumara then sent back BJ Watling for a duck with a well-directed short ball that the batsman popped to the keeper, ducking awkwardly with eyes off the ball. The fifth-wicket stand between Watling and Latham was the first sub-50 partnership of the innings.

Sri Lanka could have had another soon after when Colin de Grandhomme edged a flashing drive off Dilruwan, but Karunaratne didn’t react quickly enough at gully as the ball flew past his left hand. De Grandhomme would go on to clatter 49 off 53 balls, pulling Kasun Rajitha for three big sixes, and adding 73 at close to five an over with Latham.

Extra-time goals give Atletico victory over Real in Super Cup

March 9, 2020 byTSM Web Desk No Comments
The UK Armed Forces Cricket Association (UKAFCA) arrived to Sri Lanka this week, as part of their tour of India and Sri Lanka.