Change needs to happen and soon. First would be to keep politics out of sport. Plenty of talent available, highly underused or should i say ignored.

Sad that @OfficialSLC has dropped to this level. Such a shame for a country with a golden past. Atleast be competitive.

Sri Lanka have been knocked out of the 2018 Asia Cup after Afghanistan secured a resounding 91-run victory to beat their opponents in an ODI for the first time.

Thisara Perera’s first innings five-wicket haul was in vain as Afghanistan’s total of 249, fuelled by Player of the Match Rahmat Shah, proved too much for Sri Lanka to chase against an astute, varied bowling unit.

Having crashed to a 137-run defeat in the Asia Cup opener against Bangladesh, Sri Lanka entered their final group-stage encounter knowing only a win would do. Although Afghanistan had never beaten Sri Lanka in an ODI, losing both their previous encounters, they entered the campaign buoyed by recent series wins against Zimbabwe and Ireland. 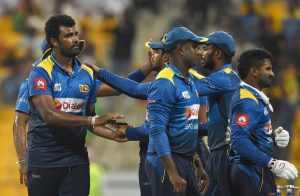 Their confidence showed. After Afghanistan won the toss and opted to bat, Mohammad Shahzad (34 from 47) and Ihsanullah (45 from 65) got them off to a solid start as Lasith Malinga and Dushmantha Chameera struggled to make an early breakthrough.

Afghanistan clocked up their 50 in the 11th over as the openers punished anything loose, but after smashing a maximum over mid-off Shahzad was out lbw to mystery spinner Akila Dananjaya, failing to connect with an attempted reverse-sweep. 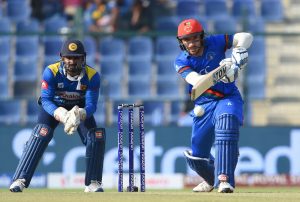 Rahmat Shah taps the ball down the ground.

Rahmat Shah arrived at first drop and looked in good touch from the get-go, as he ushered Afghanistan into a promising position. Sri Lanka skipper Angelo Mathews searched for a wicket and Akila and Shehan Jayasuriya provided, dismissing Ihsanullah and Afghanistan’s leader, Asghar Afghan, both lbw – the former via a DRS review.

That didn’t deter Afghanistan, who reached 150 in the 35th over, with Rahmat reaching his half-century soon after. The No.3 eventually perished whilst trying to up the ante, caught at long on off the bowling of Chameera to make it 190/4.

Rahmat, who scored 72 from 90, along with Hashmatullah Shahidi (37 from 52), had provided a launchpad that gave Afghanistan’s lower-order freedom to strike. The attacking strokeplay allowed Thisara Perera (5/55) to steal his fourth ODI five-for during the carnage, with three scalps falling in the final over.

Mohammad Nabi, Najibullah Zadran, Gulbadin Naib, Rashid Khan and Mujeeb Ur Rahman were his victims, as Afghanistan finished one run short of 250. 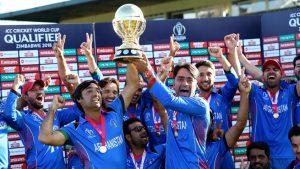 Sri Lanka’s reply got off to the worst possible start when spinner Mujeeb trapped Kusal Mendis on the pads to grab their first scalp before Sri Lanka had recorded a run.

Upul Tharanga and Dhananjaya de Silva began to rebuild but Mujeeb was causing problems. The first ten overs yielded 44 Sri Lanka runs but just after the 50 partnership was reached, de Silva succumbed to a hapless run out after a huge mix-up with his colleague.

Just as Sri Lanka began to find their stride again, Rashid entered the attack to bowl Kusal Perera before Naib got Tharanga caught at mid-off for 36, as Sri Lanka lost two wickets for two runs to find themselves 88/4. Advantage Afghanistan.

When Sri Lanka reached their century at the inning’s half-way point, they still required 150 from their remaining 25 overs to stay in the Asia Cup.

When Mathews turned down Jayasuriya’s plea for a second run and the latter was run out, Sri Lanka desperately needed a captain’s knock to have any chance of pulling this one back, but Afghanistan were relentless in their pursuit of a memorable victory.

Thisara Perera added 28 runs from 36 balls to add to his first-innings five-for before being bowled by Naib (2/29), while Mathews holed out in the deep off Nabi (2/30).

Dasun Shanaka and Akila Dananjaya soon followed for 0 and 2 respectively, as Sri Lanka’s tail capitulated, with Rashid (2/26) claiming the final wicket of Malinga to round off a poor Sri Lankan performance.

Bangladesh beat Pakistan to set up final against India

September 27, 2018 byRevatha No Comments
Pakistan knocked out of Asia Cup Wednesday night in UAE, by Bangladesh.